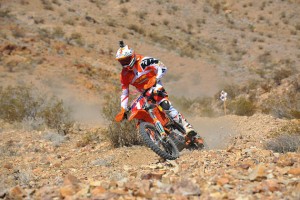 A bill to block a U.S. Marine Corps takeover of California's Johnson Valley off-highway vehicle recreation area was approved by the U.S. House Committee on Natural Resources on May 15, the American Motorcyclist Association reports.

The measure would designate Johnson Valley as a national off-highway vehicle recreation area, protecting it from a takeover, but would authorize limited military use of the area.

Several years ago, the U.S. Department of the Navy began the formal process to take over some 365,906 acres of public land near San Bernardino to use for live-fire training for the Marines.

The move threatens the Johnson Valley Off-Highway Vehicle Riding area, a long-standing and popular area that is across the San Bernardino Mountains from Los Angeles.

The Navy filed an application with the U.S. Interior Department seeking control of the public land in question, which is now under the jurisdiction of the U.S. Bureau of Land Management. The Navy also is seeking to control some 72,186 acres of non-federal land in case one day it is acquired by the federal government.

The land, which equals about 658 square miles, borders the Marine Corps Air Ground Combat Center at Twentynine Palms, and includes a large portion of land in the 189,000-acre Johnson Valley area.

Ultimately, Congress will decide whether the Navy should get control of the land.