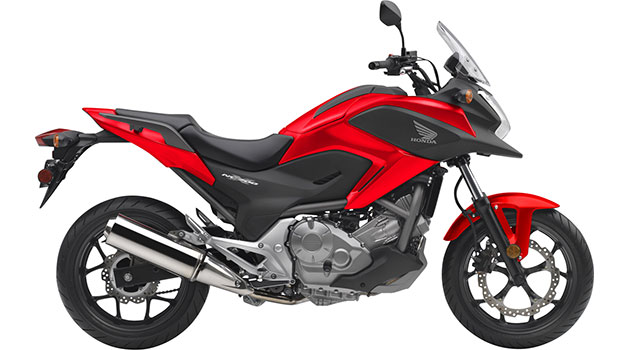 In this day and age, it's rare to find a motorcycle that can provide everything you need in one single machine. Whereas many of today's creations are customized to perform well in specific situations, very few bikes offer the flexibility most riders need and want. That is, until you get to the 2013 Honda NC700X. This machine is perfectly capable of being a great commuting bike while also lending itself to adventure touring on any kind of road. 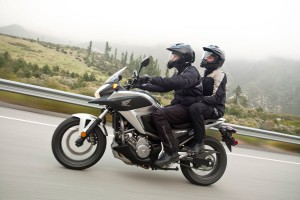 The 2013 Honda NC700X is perfectly capable of being a great commuting bike while also lending itself to touring on any kind of road - Photo: Fran Kuhn[/caption]

The engine behind this impressive bike is a parallel-twin, liquid-cooled motor with a 670cc displacement. You get plenty of power to propel the relatively light machine - it's about 505 pounds with a full tank - through any environment.

Even with so much power, the machine doesn't sacrifice any handling or agility. The cylinders in the engine have been angled forward to improve the weight distribution, and the cast aluminum wheels measure in at 17 inches and anchor the diamond-shaped steel frame. Although the chassis is rigid and compact, it has been designed to give you a comfortable riding position and plenty of space, so you won't even realize you're on a smaller bike until you see how expertly you can maneuver around in tight places.


Features That Hold Up

One of things you'll love best about the NC700X is the 41mm front forks. These allow the bike to find great middle ground between commuting bikes and traditional touring machines, providing just less than 6 inches of travel.

Another addition that shouldn't be overlooked is the optional DCT (automatic dual-clutch transmission). You can shift gears with the push of a button on the handlebar, and the gearbox even boasts a special function that learns your patterns as you ride, making it easier to shift and extend the longevity of the machine. 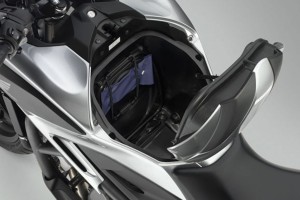 The storage area is located where the gas tank is normally found, giving you easy access to your possessions.[/caption]

Planning on being on the road for an extended period of time? The 2013 Honda NC700X has you covered. With locking, watertight compartments and a 3.7-gallon fuel tank, you'll be able to take full advantage of the 60-plus miles to the gallon that the machine gets. As a bonus, the storage area is located where the gas tank is normally found while the fuel is under the seat, giving you easy access to your possessions and keeping them in a secure place.

Of course, with the way this Honda motorcycle rides, you're not going to want to end your trip very quickly. Whether you're going down the street to the grocery store or embarking on hundreds of miles of trips, you can enjoy the power, agility and style of the 2013 Honda NC700X.