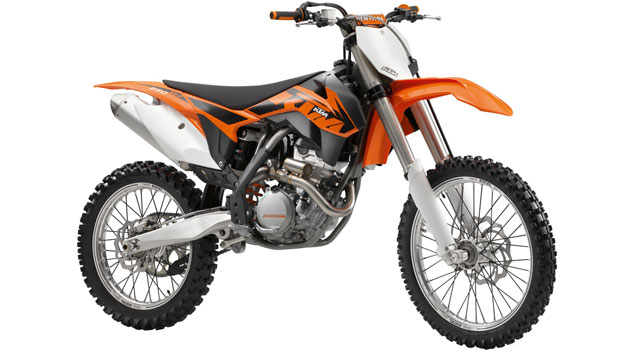 I've spent my fair share of time riding a lot of KTM dirt bikes, and I consider myself to be pretty adept at distinguishing which characteristics and dirt bike parts are among the best. So it's nice to see my personal preferences confirmed in the redesigned 2013 KTM 250 SX-F, which features many all-new aspects but still takes advantage of the top parts from the motorcycle's predecessors. 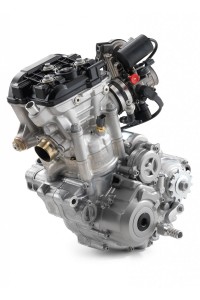 The engine has been almost completely redesigned to save weight - Photo: H. Mitterbauer[/caption]

One of the biggest changes from previous models is the engine, which has been almost completely redesigned to save weight. The motor now comes without a kickstarter and is stored in a new engine case made from a relatively new aluminum alloy that is lighter and stronger than ever before. With a liquid-cooled, single-cylinder, four-stroke engine providing power to the KTM motorcycle, riders can enjoy some strong bursts of speed and a higher rpm range.

A restyled fuel tank holds about 2 gallons of gas. Although this doesn't seem like a lot, it's more than enough to power the lightweight dirt bike. You won't have to worry too much about constantly checking the tank or other parts of the machine, however, as a new connecting rod brings a pressure-lubricated plain bearing to the machine. Not only does this increase the rpm, but it also doubles the service life of the KTM bike. 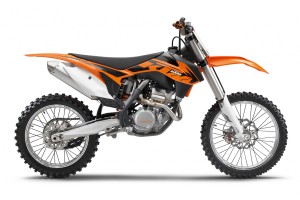 The lighter curb weight plays off the strong ergonomics of the bike - Photo: H. Mitterbauer[/caption]

The lighter curb weight - it's about 226 pounds - plays off the strong ergonomics of the bike. A mixture of chrome and aluminum materials was used in the production of the KTM 250 SX-F to provide a solid, secure ride, and that theme was carried through to the wheels and shock absorbers. KTM increased the diameter of the rear axle from 20 mm to 25 mm, which gives riders more stability, and the absorbers were redesigned to offer more traction and less chance of bottoming out.

Additionally, the front fender of the machine has no ribbing, which reduces mud buildup, while the improved structure of the fender helps to improve the rigidity of the bike. The suspension has also been refreshed, with heavier front springs to create adjustable compression on the forks.

There's a reason the KTM 250 SX-F has been among the top choices in motocross for the past several years. By focusing on decreasing weight, increasing stability and providing plenty of speed, the manufacturer has created a unique bike that any dirt bike enthusiast can be happy to own.