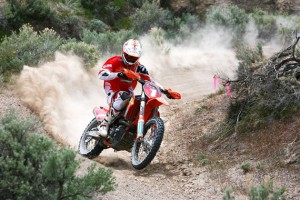 Caselli got off to a great start sitting in third position at the end of the bomb run. His teammate, Ivan Ramirez, earned the holeshot and led the pack as they began the first loop.

Caselli quickly passed into second place part way into the first loop. Moments later he was able to get around his teammate after Ramirez got turned around on the course. Once in the lead, Caselli quickly gapped the field and went on to collect his fourth win of the season with a four minute lead over the second place ride of Jacob Argubright. Ramirez eventually got back on track and was able to come back to a fourth place finish.

"The weather was amazing at this race," remarked Caselli. "It was great for riding but a little dusty until I got out front. Once I was in the lead, I was able to just cruise and ride it in for the win."