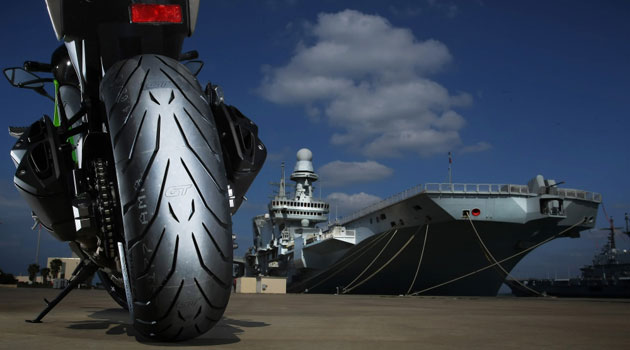 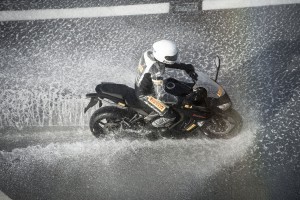 Max Biaggi debuted the tires on an aircraft carrier in wet conditions, showing off the grip and handling of the Angel GT - Photo: Marco Campelli[/caption]

Pirelli has officially released the new [mageProductLink sku="329-8712210" title="Pirelli Angel GT Rear Tire"]Angel GT Sport Touring tires[/mageProductLink]. Set apart by a refreshed design and amazing mileage, this recent introduction into the world of motorcycle tires is poised to become one of the hottest items on the market.

Already, the Angel GT tires have been designated as the top choice for mileage in the Sport Touring segment by the Motorrad TestCenter. According to Tyre Press, the gear is said to improve mileage by as much as 30 percent compared to its competitors, thanks to the inclusion of new tread, an upgraded profile structure and a compound combination that aims to maintain the integrity of the tires throughout their lifespan.

The tires were officially launched in mid-April by World Superbike Champion Max Biaggi. Biaggi debuted the tires on an aircraft carrier in wet conditions, showing off the grip and handling of the Angel GT. Pirelli boasts that the creation is 100 percent Italian Gran Turismo, making the tires ideal for traveling long distances with a passenger or for motorcycles that are fully loaded.

With superior mileage and opportunities for personalization, the Pirelli Angel GT tires are an excellent option for riders looking to outfit their machines with the best options out there.