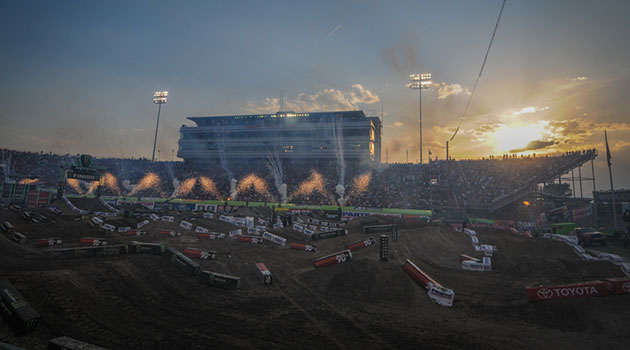 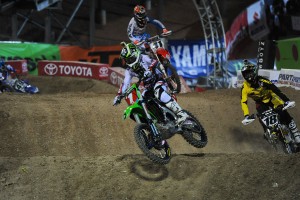 Ryan Villopoto put a show on for the crowd at the final round of Supercross in Las Vegas - Photo: InsiderMX.com[/caption]

Ryan Villopoto may have clinched the Supercross championship last week, but that didn't stop him from putting on a show for the crowd. The Kawasaki rider closed out his third consecutive motorsports title in style, winning the 17th and final event of the 2013 season at Sam Boyd Stadium in Las Vegas.

The victory, which was Villopoto's 10th of the year, came after the rider battled back from a poor start to the race. He took the lead by the end of the first lap and held on for the remainder of the event, claiming the victory in an impressive fashion.

"This is a great way to cap the season off," Villopoto said. "We rebounded this year from a bad start at the season opener and won the title. There is no better way to end a season than like this."

He was joined on the podium by Ryan Dungey and Davi Millsaps, who completed the race in second and third place, respectively. While Dungey may have outraced his competitor at the finish line, he was unable to do enough to change the overall standings, where he ended the season just one point behind Millsaps in third. 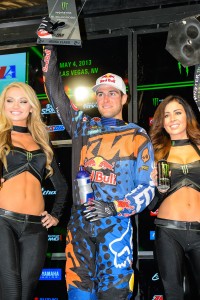 Red Bull KTM Factory rider Ryan Dungey ended the Supercross season on a high-note finishing 2nd overall at the Monster Energy Supercross Finale held at Sam Boyd Stadium in front of a near sold out crowd.

Dungey had great lap times in the early afternoon qualifying sessions which led to him getting first gate pick in the first 450SX heat. When the gate dropped for his heat, Dungey leaped out front to secure a 2nd place start as he rounded the first corner. Dungey continued to hold his position for the first half of the heat as he reeled in the lead ride of Jake Weimer. With two laps to go he was able to make the pass stick on Weimer and went on to take the heat win to get a top gate choice in the main event.

In the main event, Dungey once again got out to a decent start sitting within the top five as the riders neared the end of the start straight. By the end of the first lap he had moved into 3rd position and a lap later he was already sitting in the runner-up position. From that point on he rode a consistent race to maintain his position. At the end of the twenty lap main event he crossed the line in 2nd position to secure a podium finish.

"I just want to thank the Red Bull KTM Factory Team for their continued support this season. We were able to finish third overall in the championship which is still something to be proud of. We will now focus on our next goal which is to defend our 450 Motocross Championship," stated Dungey after the event. 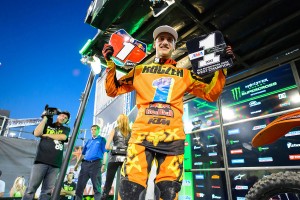 Roczen arrived in Las Vegas with a five point lead in the championship point standings. He put in a great practice time early in the day to earn the top spot on the leader board and first gate pick in the main event.

When the gate dropped for the main event Roczen rounded the first corner in fifth position. He quickly moved into the top three by the second lap. At the halfway point he desperately needed to pass the second place ride of Martin Davalos in order to secure the championship while Eli Tomac was up front. On the final lap, Roczen cut inside Davalos and made a pass to take over the position. A few corners later he crossed the checkered flag finishing second in the race, but most importantly, finishing in position to earn his first career 250SX Championship. 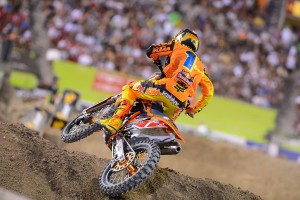 "It felt great to see that number one plate on my bike while I was racing" - Ken Roczen / Photo: Simon Cudby[/caption]

A very happy and emotional Roczen stated on the podium, "I am so happy for this championship. It is the biggest championship I have ever won. I am so thankful for everyone on my team that has stood behind me this whole season and believed in me from the beginning. Now I just need to get a good start in the shoot-out and hopefully get another podium finish."

Moments later Roczen did get his good start as he took his first holeshot of the season leading the riders down the long start straight for lap one of the East/West 250SX Shoot-out. Roczen's teammate, Marvin Musquin, was on the heels of Roczen and even swapped for the lead position the first half of the race. After the halfway point, Roczen began to pull away and eventually went on to take the shoot-out win to put the perfect end to a great day. Musquin was able to hold on for a podium finish with a third place result.

"I finally got a great start and was able to get out front," stated Roczen. "It felt great to see that number one plate on my bike while I was racing. It feels so great to get this win and my championship in the same night. This is really unforgettable." 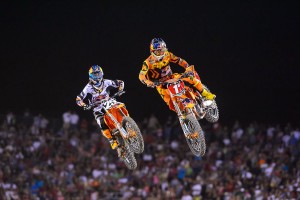 Marvin Musquin was on the heels of Ken Roczen, swapping for the lead position the first half of the race - Photo: Simon Cudby[/caption]

Musquin, who finished second in the East 250SX Supercross main event, took a third place finish in the shoot-out. "I gave it everything I had in the East 250SX main, and just came up a bike length short of the win. I was very tired in the shoot-out race after fighting so hard in the first main event, so unfortunately, I couldn't battle with my teammate for the win. I am happy that I was still able to get on the podium and I am very happy for Ken and his championship."

Roczen and Musquin will now have a two week break before returning to racing in the 250 Motocross class at the opening round of the Lucas Oil Pro Motocross Championship Series on May 18, 2013.