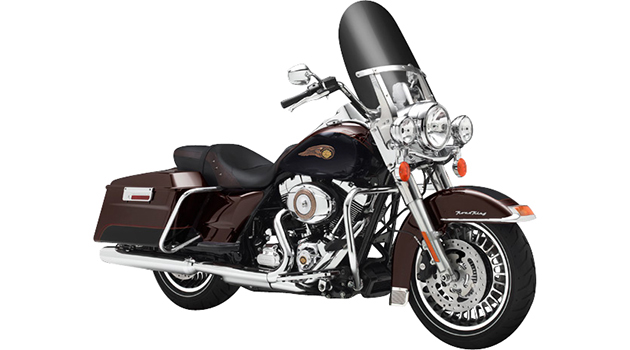 2013 Harley-Davidson Road King: A Modern Twist On An Old-Fashioned Bike

When it comes to motorcycles, I always appreciate a nod to tradition. That's why I've always really liked the Harley-Davidson Road King. Since its initial release nearly 20 years ago, enthusiasts and purist have loved the Road King's classic styling cues which reflect back on the MoCo's heritage. And what a long heritage it has been, 110 years to be exact. To help celebrate such a remarkable milestone, for the 2013 model lineup Harley released a collection of select Anniversary models with the 2013 Road King being one of them.

Harley-Davidson continually increases its engine displacement and last year the majority of the OE Big Twin lineup (Softail, Touring, and most of the Dyna models) finally crested the century mark with the 103ci (1,690cc) Twin Cam engine. Those coming off the 96ci TC mill or are new to Harley will definitely like the performance of the triple-digit engine when riding with a passenger, as the bike requires noticeably less effort to move about. The air-cooled, 45-degree V-twin engine boasts 100 foot-pounds of torque at 3,250 rpm, providing enough power for riders of all skill levels. While it may not be as powerful as some of its competitors, it's got more than enough power to get riders cruising down the road easily and with a smile.

The Cruise-Drive six-speed transmission aims to give riders a perfect balance between engine turnover and road speed, allowing them to transition through the gears with ease and make the most of the their time on the road. Full-length footboards, air-adjustable rear suspension, wide-set handlebars, a detachable windshield, and a two-person seat are all standard features that come together to create a superior riding experience.

To set off this classic and comfortable design, the 2013 Anniversary Road King (along with the other Anniversary models) comes with all available factory-installed options as standard equipment. For the Road King that means, the Security Package Option with factory-installed Harley-Davidson Smart Security with hands-free fob, anti-lock brakes (ABS), and electronic cruise control.


Final Thoughts - Bow Down Before The King

Touring can be pumped up to the next level thanks to cruise control, which uses electronic throttle control technology to eliminate the need for wires or cable cluttering the handlebars. The rest of the features aim to improve the ease of riding as well. Self-canceling turn signals use the speed and angle of the bike to determine when they're needed, an output accessory connector is available to charge electronic devices and gear, and the security system is enabled with smart tools to maximize protection.

The bottom line is the 2013 Anniversary Edition Harley-Davidson Road King is a special bike that will catch the attention of the traditionalist as well those who like to stand apart from the majority. And with the exclusivity of this model people can do just that. On the other hand if you're not one for special themed or limited edition bikes, you can pick up one of the regular OE Road Kings, available in several fresh paint schemes/colors for 2013.