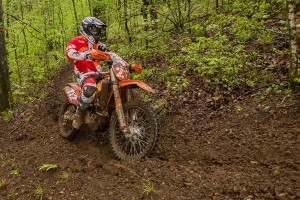 Factory FMF/KTM rider Charlie Mullins took his fourth win of the season at the fifth round of the Rekluse/AMA National Enduro Series.

Mullins started the day off well taking the first test section win by 18 seconds on the next closest competitor. He kept his momentum going finishing second overall in the next three sections just seconds away from the top times. He found another burst of energy in the fifth and sixth tests where he again took the win in both sections to earn his fourth win of the season.

"It was a pretty muddy course today because of the rain but the course actually became pretty fun near the end when it began to dry up," remarked Mullins. His Factory FMF/KTM Team Manager Antti Kallonen, also stated, "Mullins really turned it up in the final sections once he was able to gain more traction from the drier course. It allowed him to extend his lead as he worked his way toward another win."

Now five rounds into the series, Mullins holds a 20 point lead in the championship standings. The next round will be held on June 9, 2013 in Marquette, MI. 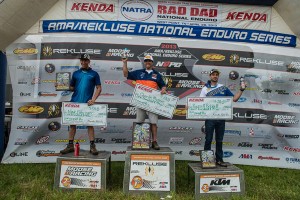 Both riders have frequented the podium this season and once again found themselves battling each other throughout the six special test sections. Rain the night prior had left the course muddy in most sections. "The course was definitely challenging but quite fun," commented Fahringer. "The first section was very slick and I struggled a bit." That section would prove to be his worst as he went on to win the next two special tests to put his Husaberg in contention for the win.

Meanwhile, Bobbitt stepped up his game following the third test by taking the win in the fourth. He went on to finish third in the final two sections to secure the final podium position. Fahringer finished the last two sections in second place to secure the runner-up spot. "I felt really good today," stated Fahringer. "My bike worked really well considering the conditions and I felt really strong in the final tests. I am really looking forward to the next round and hoping to get on the top step of the podium."

Eight-time National Enduro Champion Mike Lafferty put together a decent ride to finish 5th. Lafferty turned scores inside the top five throughout the first five tests and was within the podium hunt. Unfortunately, he struggled in the final test section which placed him in 5th overall.

Five rounds into the series, Bobbitt remains second in the championship standings while Fahringer holds third and Lafferty fourth. The riders will now head into a long break before heading to the sixth round to be held in Marquette, MI on June 9, 2013.