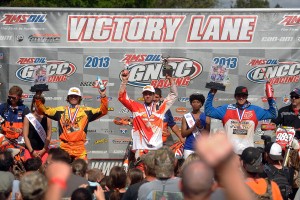 Rain the week prior had made the track condition prime for off-road racing. There were only a few mud holes and the course was moist enough in most areas to keep the dust down. The optimal conditions allowed the racing to be close in all classes.

Mullins and Russell launched off the line to top three starts. Russell quickly moved into the lead with Mullins in tow and the two teammates speedily pulled away from the rest of the field. Russell would lead the first three laps of the race before Mullins made a pass for the lead after the gas stop. Russell suffered a crash shortly after the gas stop and lost 15 seconds to his teammate. He quickly recovered and put down a fast lap in order to make up 7 seconds on Mullins. For the final lap of the race the teammates were within 10 seconds of each other. As they approached the last mile of the race, Russell fell in a corner which allowed Mullins to move ahead and claim his third win of the season. Russell finished approximately 30 seconds behind in the runner-up position.

"Kailub gave me a run for my money today," commented Mullins. "We have been close all season but today was definitely a challenge. It is great to be battling with my teammate and to have someone push me at each event. I am glad to get the win here today and add to my points lead." 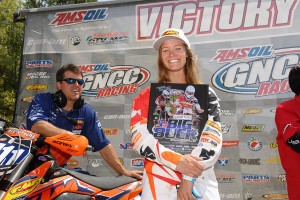 Maria Forsberg put together another solid performance to claim her third win in a row - Photo: Harlen Foley[/caption]

In the GNCC XC2 Pro Lites class KTM support rider Grant Baylor grabbed the holeshot. He ran inside the top five all day and eventually went on to finish second overall. His podium finish at the Big Buck GNCC allows him to maintain second place in the championship standings.

Factory FMF/KTM rider Maria Forsberg, fresh off her silver medal at the Women's X-Games EnduroCross in Brazil, put together another solid performance to claim her third win in a row. Forsberg got off to a great start and battled with RPM/KTM rider Kacy Martinez throughout the day. When the checkered flag flew Forsberg took the win, Martinez finished second and Jessica Patterson rounded out the podium.