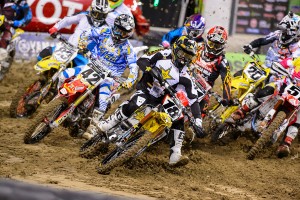 AMA Supercross is heading into the final stretch of its schedule. The motorsports series recently wrapped up round 15 of 17, and spectators saw a dominating performance from Honda Muscle Milk's Justin Barcia. He won just his second career Supercross race after leading for all 20 laps of the main event.

Barcia took the holeshot and never looked back. Although Ryan Villopoto was hot on his heels for the entirety of the race, Barcia remained strong and didn't let up long enough to give up the top spot. He eventually crossed the finish line first, with Villopoto only a few seconds behind.

"I didn't get the start I wanted, so to come out the way I did and salvage that was awesome," said Villopoto. "I rode 20 solid laps but Justin [Barcia] was on it. I just really couldn't do anything with him. The way it turned out tonight was pretty good for what we were up against."

Davi Millsaps began the race close to the front two riders but lost ground over time to complete the event in a distant third.

With his second-place finish, Villopoto stays firmly atop the points standings. Millsaps, the only other person to lead the rankings this year, currently sits 25 points behind in second, while Ryan Dungey is right behind him in third. 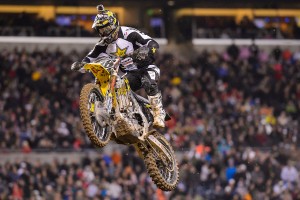 "It's been a great run and the best of the best are all in this class right now and we're all near the front." - Davi Millsaps[/caption]

Rockstar Energy Racing made the trek up to Seattle and back in the open air stadiums of the West. For the second consecutive week less than desirable weather was experienced. Last weekend snow, this weekend rain. For the first time this year the Saturday schedule was abbreviated with the track being covered for as long as possible. The rain actually held off for most the day. Sprinkles didn't really start until the track was uncovered. It rained off and on for much of the night show, but the track never became unrideable. It was muddy but not terrible. Sometimes however that condition can be very deceiving. Most riders would rather it rain hard or not at all.

Davi Millsaps looked incredible in the final 450 qualifying practice of the day. Not only was he on top of the leader board for the majority of the practice, but he just kept posting faster and faster times. It was no surprise that he easily won his heat race by several seconds. Then as the track crew was reworking the racing surface prior to the 450 main, the clouds began to spit yet again. Davi decided to have mechanic Steve Westfall change his front dirt bike tire. The expectant downpour did not arrive however so the tire change was not needed. Millsaps had a decent start and quickly moved into 3rd. At one point he was catching the leaders in front of him and really seemed to be pushing to the front. Then all 3 riders settled into their pace on the tough track and cruised to the finish line.

"It was a tough race. I made a change before the start. It started raining and I kinda panicked. I shouldn't have made that change but hey, it's racing and I took a chance. It was good in the beginning when it was slippery. But once it tacked up a little bit I was struggling. I'm a very heavy front end rider and I went to a more grippy front tire and it ended up not raining. So you live and you learn. It was a great night though and it was my 10th podium of the year so I'm pretty stoked on that. Also my 7th heat race win. It's just been an awesome season. I know I lost the points lead, then dropped to 3rd and now I'm back to 2nd but it doesn't matter. It's been a great run and the best of the best are all in this class right now and we're all near the front." - Davi Millsaps 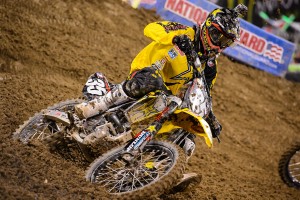 Ryan Sipes fought for every position and battled with his peers 'til the bitter end.[/caption]

Ryan Sipes hasn't been able to line up on the gate and race since the middle of January. After breaking his hand in a pile-up at Anaheim 2, then having to have a couple surgeries to repair it, he has been kept off the bike for quite some time. Ryan was ready to make his return, but the unpredictable track made things very difficult. He looked to be riding good enough to pick up a podium, however, at about the halfway point of the main event. That is about the time his arms began to pump up.

Anyone who has ever had arm pump knows it's scary. Imagining arm pump on a slick, rutty Supercross track is a frightening thought for most. It was clear that Sipes was not just going to give up though. He fought for every position and battled with his peers 'til the bitter end. His speed was there and he needs to take the positives into next week.

"It was an ok weekend. It was a tough one to come back to cause the track was so technical and I was just fighting it. I couldn't find a flow but luckily my starts were really good. In the main I got out and passed Christian [Craig] into 3rd. For about 7 or 8 laps I felt pretty good. The leaders were getting away a little bit, but I was just kind of riding my pace. Then I just got tight. I was afraid to charge stuff cause I thought my hands were gonna come off. I don't really ever get arm pump but I got it tonight. I think it was just because it was my first one back and the track being so gnarly. I gave it everything I had and fought til the end. 7th isn't where I wanna be but there were good parts to the night." - Ryan Sipes 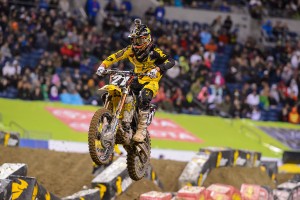 Jason Anderson was very fast all day, but was forced back into 10th place.[/caption]

Jason Anderson was very fast all day. Frequently on the qualifying leader board. In his heat race he got a great start, then it was red flagged. After the caution it was a full restart and again Jason rounded the first turn in a stellar position. He rode to a solid 2nd place in the heat but more impressively was the fact that he was catching Eli Tomac and remaining mistake free on a track most riders were faltering on. Things were looking very good going into the main. Unfortunately Anderson's main event did not start as well. He began the race buried in the pack. Then things just got worse. With the track being so rutty, a lot of the riders were looking for new lines on the very edges of the track. Under these circumstances, tuff blocks get kicked into the track frequently. That is exactly what happened just in front of Jason. He could not avoid the tuff block and went down. He is certainly not a 10th place guy, but with everything that took place, he couldn't ask for much more. Anderson nearly won in Salt Lake City last year, so he will be looking forward to next week.

"My night started out good. My starts are getting better. I just need to put it all together with laps and not getting too anxious and not crashing. I was riding good tonight so I can take that away from it. - Jason Anderson

The team trio heads to Utah next week where it has snowed the past several years. Also an open stadium, the hopes will be for a nicer climate than the previous two races. Davi will aim for his 11th podium and 3rd win of the season. Sipes will look to get back on track returning from his injury and Anderson will compete for his first career Supercross win. 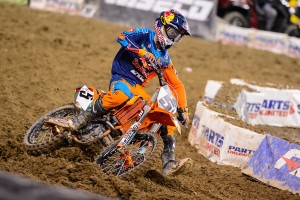 Red Bull KTM Factory rider Ryan Dungey put in a tremendous ride at the fifteenth round of the Monster Energy Supercross Series when he rebounded from a first corner crash to finish 4th in the 450SX Supercross class.

After the night show opening ceremonies, Dungey was placed in the second 450SX heat where he got 4th off the start. He quickly made two passes to move into 2nd position. He held on to easily qualify for the main event.

The riders were faced with a quickly deteriorating track as they lined up for the main event. Rainfall from earlier in the day had left the track very muddy which formulated into deep ruts and slick straightaways.

Dungey managed to get a decent jump off the start, but unfortunately, collided with multiple riders causing him to go down in the first corner. He quickly recovered from the crash and was able to cross the finish line in 14th at the end of the first lap. In a remarkable charge through the pack, Dungey consistently picked off riders for the next ten laps to move into 5th place at the halfway point. On the twelfth lap of the race, Dungey moved into 4th place after Trey Canard suffered a crash. He continued to tick off fast times but was unable to grab another position. He crossed the finish line in 4th place. 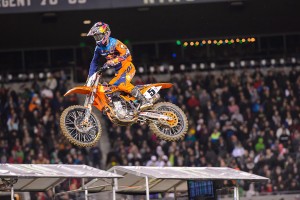 "I am really bummed that I suffered a crash in the first corner," remarked Dungey. "I am happy with my ride back through the pack but I lost some valuable points in the championship tonight. I am really looking forward to the final two rounds where I feel like I can battle for the win and hopefully get on the top step of the podium for my team before the end of the series."

With two rounds remaining, Dungey sits 26 points down in the championship point standings. 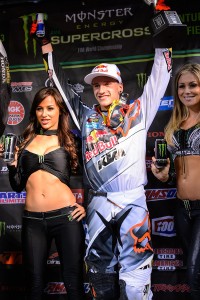 Roczen was in the second heat where he got off to a 2nd place start and quickly passed Jason Anderson to move into the lead. Unfortunately, the race was red flagged quickly after and the riders returned to the gate for the restart. When the gate dropped again, Roczen launched out to another 2nd place start. Shortly after, Roczen suffered a crash in the mud and fell to 8th position. A lap later he crashed again and dropped to 12th. After remounting he was able to come back to 7th to qualify for the main event.

When the gate dropped for the main event, Roczen put his KTM up front rounding the first corner in 4th position. He made the pass for 3rd on the first lap and moved into 2nd the lap after. Once in 2nd position, he picked up his pace and began to close in on the lead ride of Eli Tomac. The two riders quickly gapped the field. Around the halfway point Tomac suffered a hard crash allowing Roczen to inherit the lead. Roczen quickly pulled away and went on to lead the remaining laps to take the win by 9 seconds.

"It feels great to get the win here tonight," remarked Roczen. "We had a long break and it is good to return to racing and ride up front. The track was very challenging and it was all about riding a smart race. I am happy I didn't suffer any crashes in the main event and could gain more points in the championship standings."