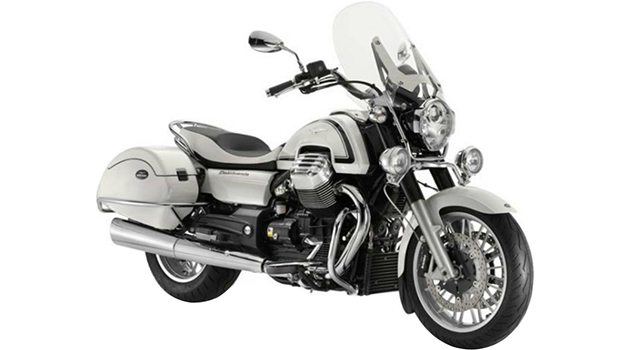 The motorsports world has been abuzz with news and rumors about the new 2013 Moto Guzzi California 1400. Available in two separate models, Custom and Touring, the machine is the hottest thing on the market. I'll be taking a look at the Touring model here, but keep an eye out for my next review in this series, covering the Custom model.

Although the most recent Moto Guzzi California 1400 Touring to come from the Italian bike manufacturer has the same overall styling as the original 1971 model, there are quite a few features that set the 2013 model apart from its predecessors. Moto Guzzi only produces a few thousand bikes each year, as every model is hand-built to ensure it will be of the highest quality, and the 2013 California is no different.

The new California emulates the original model, with its low-profile handlebars, two-tone seat and rear saddlebag storage. The twin panniers are not removable from the bike, and although they haven 11.8-gallon storage space, they are not designed to fit a helmet. However, the design is far more modern and sleek than the vintage bike. The teardrop gas tank and chrome-plated headlights are two examples that set this bike apart from its former image. Plus, this modern marvel lets you convert your iPhone into a dashboard, so you can access things like navigation, performance and technical data through the companion app. This feature certainly puts the California in a class of its own, even among modern-day competitors.


Technical Specs That Wow The Crowd

Even though this masterpiece could please the crowd on looks alone, it certainly doesn't hurt that it comes with a 1380cc air-cooled engine. This massive motor generates up to 96 horsepower and 88 foot-pounds of torque, giving it an aggressive side that most touring models lack. This is one aspect of the bike that wasn't overly modernized, as it is powered by a longitudinal crankshaft and idles at around 1400 RPMs. Such a boisterous engine might cause a lot of vibrations, but Moto Guzzi designers anticipated this and constructed a unique system to muffle some of these vibrations. The "elastic engine" system relies on rubber mounts and three rocker arms to keep the motor from making the whole bike shimmy and shake as it sits in its twin-cradle steel frame.


A Smooth Ride Only Adds To The Class

As if owning a hand-built bike wasn't enough, riders can also brag about the smooth handling and easy maneuverability of this 743-pound beast of a motorcycle. In fact, controlling the bike is a near-effortless experience thanks to large wheels, a ride-by-wire throttle and a dynamic suspension system. This lets the rider feel comfortable cruising around at lower speeds, but all bets are off when the bikes opens up on the highway and takes advantage of all that power.