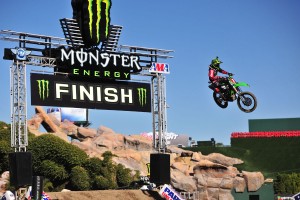 Another race, another win for Ryan Villopoto. The Kawasaki rider extended his dominant string of wins with his fifth consecutive victory. It was the eighth overall win for Villopoto, who has looked unstoppable in the motorsports series as of late.

Held at Reliant Stadium in Houston, Texas, the Supercross race was Villopoto's to win from the start. He shot off the starting line, grabbing the lead during the opening lap and holding on for the remaining 20 trips around the track.

"It was tough out there tonight," Villopoto said after the race. "The track was breaking down out there, and there were several variables that we had to deal with. You had to move quickly out there tonight, and that is what I did in the early part of the race. I wanted to establish a lead before the lapped riders would begin to play a factor in the race."

Ryan Dungey and Trey Canard rounded out the podium after ending the race in second and third place, respectively. The strong finish put Dungey just four points out of second place in the overall standings, which is currently held by Davi Millsaps, although both competitors are now more than 20 points behind Villopoto.