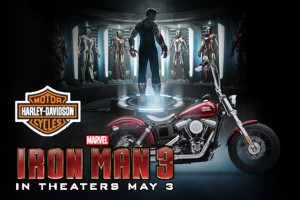 A new contest is set to bring Harley-Davidson riders one step closer to their favorite superheroes. The motorcycle brand is teaming up with Marvel Entertainment to launch a special Man & Machine contest in honor of the release of "Iron Man 3."

To enter the competition, fans can go online and create their own comic book character. Each one has a back story and their favorite customized Harley-Davidson bike and motorcycle gear, and the entries will be judged on the originality of the hero and storyline, the development of the character and how well he or she promotes the values of freedom and independence, Motorcycle.com reports.

Fans can enter the contest from now until May 31. There will be five winners selected, all of whom will be drawn into the comic series as members of the Road Force team and get a trip to San Diego Comic Con. One lucky grand prize winner also receives their customized Street Bob bike.

"Iron Man, one of Marvel's most iconic creations, truly embodies the rebellious attitude and power of Harley-Davidson," said Dino Bernacchi, director of Harley-Davidson marketing communication. "... In 2012, Marvel fans proved their creativity with our first co-created Avengers comic book. Now, we're raising the stakes by unveiling the winners on one of the world's largest stages - San Diego Comic Con."