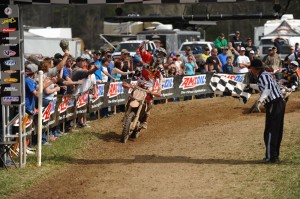 Factory FMF/KTM rider Charlie Mullins earned his second victory of the season at the third round of the GNCC Series in front of hometown family and friends. His GNCC XC1 Pro class win at the Steele Creek GNCC moved him into the points lead in the overall championship standings.

Mullins day didn't start as well as it ended as he started the race in 16th position and had to work his way toward the front on the first lap. He climbed through the pack with his teammate, Kailub Russell. By the end of the first lap it was Russell who had the lead and Mullins who was trailing just behind.

The two repeated the battle they had at the second round of the series for the first four laps switching the lead a few times. On the fourth lap the team stopped to pit each rider. It was at this point that Russell began to feel the side effects from a cold he had been fighting earlier in the week. Once Russell slowed his pace, Mullins was able to climb to a big lead and went on to take the win by two and a half minutes over Russell. Luckily, Russell had pulled a sizeable gap over the 3rd place rider before the halfway point and he was still able to maintain 2nd position. The 3rd place ride went to fellow KTM rider Chris Bach to make it an all KTM podium sweep.

"It feels great to get a win here today," stated Mullins. "I always like this course and today it was exceptionally good. The rain prior to the race made the track conditions perfect and I felt really good all day. I am glad to head to the next round with the points lead." 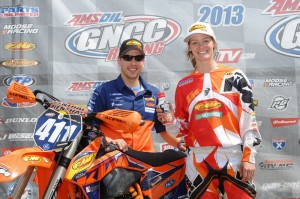 In the GNCC XC2 Pro Lites class, KTM support rider Jason Thomas put in an impressive ride leading the race until the final few corners. He was able to finish in 2nd position just ahead of the 3rd place KTM ride of Grant Baylor.

The GNCC Women's class was once again dominated by reigning champion, Maria Forsberg. The 4X GNCC Champion, started inside the top five and moved into the lead early in the race and never looked back. She took the win over RPM/KTM rider Kacy Martinez and the 3rd place ride of Jessica Patterson.