MotoGP Kicks Off Season In Qatar 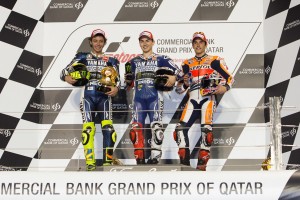 The start of the 2013 MotoGP season picked up right where 2012 left off - with Jorge Lorenzo on top of the podium. The Yamaha rider led the motorsports event from start to finish, eventually opening up a nearly six-second lead over his competitors and cruising to a win in Qatar.

"I'm really happy, really pleased and really proud of myself and the team," Lorenzo told MotoGP.com. "This weekend has been quite perfect, especially in the race, as we were very strong from the beginning ... I opened up two or three seconds of a gap which gave me the focus and allowed me to stay calm."

Lorenzo was followed by his new teammate, Valentino Rossi. After two tumultuous years with the Ducati team, Rossi switched back to Yamaha and immediately had strong results with a second-place finish.

In one of the more surprising finishes of the day, rookie rider Marc Marquez edged out Honda teammate Dani Pedrosa for third place in his first official MotoGP race. Pedrosa, who was widely considered to be one of the favorites for the motorsports championship this year, got off to a tough start with a fourth-place time, narrowly crossing the finish line ahead of Cal Crutchlow.