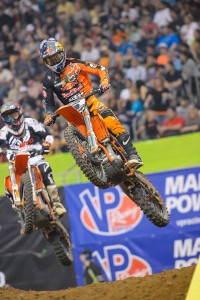 Dungey was placed in the second 450SX Supercross heat where he had the first gate pick. He had a good jump out of the gate but was pinched off in the first corner and came around mid-pack. In the second corner, he came together with Andrew Short, and luckily, pulled off a good save to keep from dropping the bike as they accelerated out of the corner. From there, he quickly set to work to pick off riders. By the third lap he had passed up to 7th when the race was red flagged due to a rider injury.

Once the rider was safely escorted off the track, the race was resumed in a staggered start format. On the restart, Dungey quickly reeled in the two riders in front of him to move into 5th. Two laps later he had caught Matt Goerke and made the pass to 4th position where he finished the heat.

In the main event, Dungey was able to pull off a 5th place start as the riders rounded the first corner. He made a few passes early in the race to move up to 3rd immediately behind the 2nd place ride of Trey Canard. Around the halfway point in the race he reeled in Canard and was able to make an inside pass to move into 2nd place. In the remaining laps he was able to make up some time on the lead ride of Ryan Villopoto but was unable to get close enough to challenge for the win. He eventually finished in 2nd position to earn another podium finish. 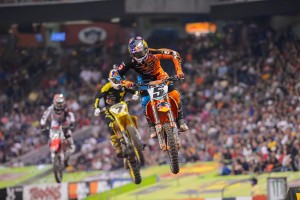 Ryan Dungey reeled in Trey Canard and was able to make an inside pass to move into 2nd place - Photo: Simon Cudby[/caption]

"I definitely needed a better start tonight. We are all so close in lap times that if you don't get the best start, the leaders pull away quickly. I was able to get into 2nd place but didn't leave myself enough time to catch Ryan (Villopoto). Overall, I am happy to be on the podium and very happy with my bike and hope to continue to improve at the next round," commented Dungey. 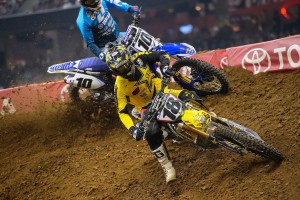 "This weekend was just ok, next weekend will be better" - Davi Millsaps[/caption]

After a much appreciated Easter break, it was back to business as usual for Rockstar Energy Racing as the east coast series returned to Texas. The team was treated with the nicest weather thus far this year and all were eager to get back to racing. Houston is always a favorite stop for the team as well, as Head Technician Jamie Ellis' father comes out to do some good old fashioned Louisiana cooking. Everyone happily stuffed their faces in between every practice, excited for the night's events to come.

The weekend off came at a very convenient time for Davi Millsaps as he was just beginning to get back close to 100% after the knee injury he sustained a few weeks prior. After a great ride in Toronto with a 2nd place, he really wanted to back that up with another podium. That just wasn't in the cards unfortunately.

Davi's customary good starts were not present this weekend in Houston. He was forced to come through the pack in both his heat race and the 450 main event. His heat was actually a very impressive ride as he came from well outside the top ten to catch all the way up to 4th in the short 8 laps. He wasn't as far back in the pack after exiting the first turn in the main but the result was similar. 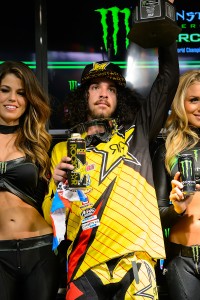 Blake Wharton bested his competitors for his first win of the season.[/caption]

He was only able to muster a 5th. There is nothing wrong with getting a top 5 in the 450 class however. Things just aren't the same as they used to be, where a couple fast guys could start anywhere mid pack and come back for the win. Starts are more important than they've ever been with the level of competition on the line each week and 5th is a positive result any way you look at it.

"This weekend was just ok, next weekend will be better" - Davi Millsaps

Blake Wharton left the Canadian Supercross with what could be considered a disappointing podium finish. Although he finished 3rd, he was much faster than that and very capable of pulling off the win there. He entered the week off with a slew of advice from all his supporting cast and knew what he needed to work on.

Throughout the day in practice, it was not apparent that he had located the improvements he needed. Blake was a bit frustrated all day. Things began to make a turn for the better once racing started as he completed a solid heat race. Shortly after the 250 main event start, Wharton made his complete u-turn.

The first lap was the best one he's ridden in 2013, quickly dicing passed several riders to get out front. He then engaged in a heated battle with Marvin Musquin. The Frenchman briefly moved past Blake to take over the lead position. Wharton immediately fired back aggressively putting himself back into first place. He managed to lead the rest of the entire affair, thwarting multiple pass attempts by points leader Wil Hahn. It was a very exciting and heart pounding race for all viewing the battle. The checkers waived and Wharton bested his competitors for his first win of the season. 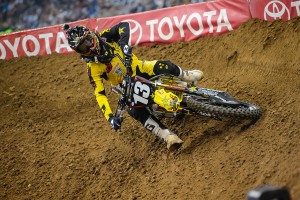 "It was great to get the win in my home state, in front of my family and friends." - Blake Wharton[/caption]

"Houston, I thought the the track was good. I thought the layout was good anyway. There were big whoops, a big finish line jump and some big bowl turns. It's nice to come back to Texas and see my family. This was the first race my grandpa has ever been to in his life. He had never been to one while my dad was racing, during my amateur career or since I have been racing professionally. It was cool to have 3 generations here. Not many people know that I was born in Houston. I spent some time growing up racing here, going to 3 palms and other local areas. It was great to get the win in my home state, in front of my family and friends." - Blake Wharton

The team will head to Minneapolis next weekend as the series returns to Minnesota after several years off the schedule. Millsaps will most certainly continue his consistency and strive to return to the podium. Wharton will hit the track full of confidence after his win and recent podium streak. Minneapolis will be the last east coast round before the west coast series returns the following weekend. 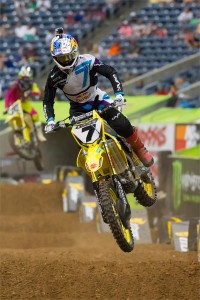 James Stewart was running in a podium position in the 450 class Main Event before having to retire from the race.[/caption]

Round 13 of the 2013 AMA/ FIM World Supercross Championships at Reliant Stadium in Houston, Texas on Saturday night was not the best of races for Yoshimura Suzuki Factory Racing's James Stewart even though he put in in a solid heat race and was running in a podium position in the 450 class Main Event before having to retire from the race.

Returning from a two-week break, where Stewart and the Yoshimura Suzuki team focused on preparing for the 2013 AMA Pro Motocross season, Stewart got a decent start in his eight-lap heat race and moved quickly into third position. Unfortunately, a red flag was thrown on lap two and the race was restarted in staggered formation with Stewart in third. After the re-start, the Yoshimura Suzuki rider quickly maneuvered his Suzuki RM-Z450 into second. Although he ran a little off course at one point and landed on a tuff block, he held on to finish second.

Said Stewart: "In the heat race, I was riding pretty good and somebody went down. Whenever you see a red flag you know someone has gone down and that sucks. So we restarted and I was riding really good, we were starting to close in on the leader, but I jumped on one of the hay bales and that bent my shifter. I could've pushed it but I decided not to take any chances."

In the 20-lap Main Event Stewart overcame a poor start with smooth yet aggressive riding and moved into fourth position. Biding his time, the Yoshimura Suzuki rider stalked third place and then took over the position at the mid-way point of the event. Unfortunately, shortly after, he went down and damaged his front wheel and was unable to finish the race.

"The Main Event didn't go like we hoped it would," added Stewart. "I didn't get a good start but I made some great passes and made my way up. I was in third and we were going at it pretty good. But I ended up washing-out the front end and I jacked up my front wheel. Overall, we made some great progress with the Yoshimura Suzuki RM-Z450 and it was running great. It was the fastest bike out there in the whoops. These weren't the best results, but we worked great together as a team and that's what counts. Now we're just looking forward to racing at Minneapolis next weekend and testing for Motocross."

Yoshimura Suzuki Factory Racing's next event is the 14th round of the 2013 AMA/ FIM World Supercross Championship on Saturday, April 13th at the Metrodome in Minneapolis. 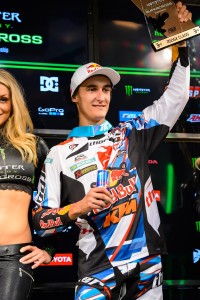 Marvin Musquin earned a hard fought 3rd overall after rebounding from a crash early in the race - Photo: Simon Cudby[/caption]

Red Bull KTM Factory rider Marvin Musquin earned a hard fought 3rd overall after rebounding from a crash early in the race at the seventh round of the Monster Energy East 250SX Supercross Series held at Reliant Stadium.

Musquin, who qualified with the fastest practice time, was placed in the second 250SX Supercross heat where he had first gate pick. His prime gate choice paid off as he pulled the holeshot and led the way around the first corner to jump out to an early lead. He continued to lead the heat for the remaining six laps to take the win and a great gate pick for the main event.

When the gate dropped for the main event, Musquin launched his KTM off the gate to a second place start. He and Blake Wharton quickly moved around the early leader to move into the top positions. The two riders began an aggressive battle for the next five laps before Musquin made a big mistake coming out of the whoop section where he clipped the tuff blocks rounding the corner and suffered a crash. He collected his bike and reentered the race only losing one position. He spent the remainder of the race trying to reel in the leaders but was not able to get back into the battle. At the end of the fifteen lap event, he held on to finish 3rd. With two rounds remaining, he continues to hold second in the championship standings only eight points down from the leader.

"The track was really good today and I enjoyed the whoops in practice and in the heat but they became very tricky in the main event. Unfortunately, they got the best of me and caused me to crash. I am bummed because I know I had faster lap times than Blake and Wil, but unfortunately, I made a mistake and wasn't able to catch back up to them today. I am now 8 points back so I am definitely going to have to get back on the top step at the remaining rounds," remarked Musquin.