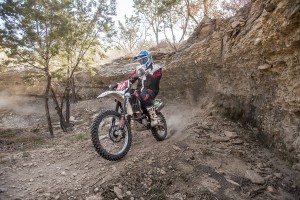 Attitude made all the difference for Andrew DeLong at round three of the AMA/Rekluse National Enduro Series. The Fred Andrews Racing (FAR) Husqvarna carded his career-first national enduro win at the Concho National Enduro in Blackwater, Texas, which was also a landmark victory for Husqvarna. The iconic brand celebrated its first national enduro win in nearly a decade (the last being Fred Hoess in 2003)! DeLong revealed that getting his TXC310R on top of the podium was all about a positive attitude.

"I just had a really good day and had fun," said Andrew, who started the season with two seventh-place finishes. "There was really no pressure. The way we went about it was to just go out and have fun. We were in high spirits the whole day and it seemed to really pull me through. That was the big difference."

The rocky Texas terrain was a formidable challenge for riders, including Andrew who had a crash on test three. A stick jammed in his brake pedal cost him some time but he still pulled off a fourth-place finish and moved into the overall lead. The 22-year-old also had some excitement on the first test when a deer joined in the fun.

"The race was held in a hunting preserve," AD explained. "I almost hit a deer that was running alongside me. It jumped in front of me and then ran next to me before jumping back into the brush." 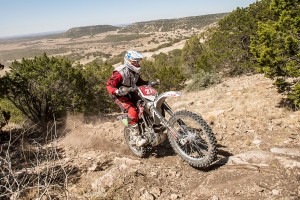 The rocky and dusty Texas terrain was challenging for the riders, but Andrew DeLong called it "just like riding in Pennsylvania." - Photo: Shan Moore[/caption]

DeLong managed to avoid any further encounters with the wildlife and stay consistent throughout the day. By the fifth test, a mere 10 seconds separated the top-five racers. In the end, Andrew kept it on two wheels and played it safe to take his first-ever national enduro victory!

"It feels really, really good to get this win," Andrew said. "I was telling Fred I don't even know if it sank in yet. I race against so many of my heroes in the national enduros - I've looked up to these guys for so long, and I can't believe I actually beat them!"

"Hopefully I can carry this momentum and attitude into the rest of the series and keep moving up," said DeLong, who used his landmark victory to catapult him into fourth in the championship after three rounds.

DeLong's wasn't the only Husqvarna on the podium at the Concho National Enduro. Support rider Nathan Federer took first in the A 250 class while Kelsey Hartem ("Husky Highlight" rider of the week - Facebook.com/HusqvarnaMotorcyclesNA) took third in the Women's division. 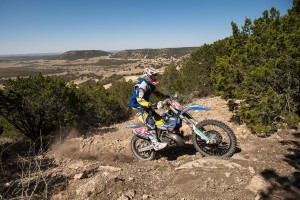 Russell Bobbitt started the day off well and remained consistent with his times throughout the day for a second place finish - Photo: Shan Moore[/caption]

Husaberg Factory rider Russell Bobbitt and fellow Husaberg rider Nick Fahringer finished second and third overall at the third round of the AMA National Enduro Series while Factory Husaberg rider Mike Lafferty salvaged a sixth place result after bouncing back from a series of crashes.

Bobbitt started the day off well and remained consistent with his times throughout the duration of the day to put his Husaberg in contention for the win. Heading into the final special test, he was only 21 seconds down from the lead ride of Andrew DeLong. Bobbitt gave it his all and walked away with the fast time in the section beating Delong by 15 seconds. Unfortunately, he was 6 seconds shy of scoring the overall and had to settle for the runner-up position.

"I felt good all day," remarked Bobbitt after the race. "Unfortunately, I suffered a couple crashes in the third test section which cost me a lot of time. I was able to make up a few seconds in the final two sections but wasn't able to get the win today."

Fahringer had a poor start to the day after a big crash set him back in the first test section. From there out, he put in solid performances and was able to move his Husaberg back into the top three to finish third overall.

Eight-time National Enduro Champion, Lafferty, also had a rough start to his day. Like Fahringer, he also suffered a crash in the first section which cost him a lot of time on the lead riders. He also struggled in the fourth section with another crash. He was able to make up time in the third and fifth test sections which helped him climb back up toward the top five to finish sixth overall. 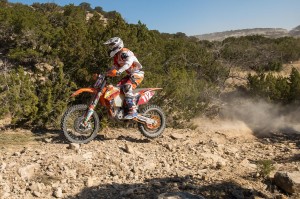 Charlie Mullins was able to salvage valuable points toward the AMA National Enduro Championship after bouncing back from a mechanical issue - Photo: Shan Moore[/caption]

Factory FMF/KTM rider Charlie Mullins was able to salvage valuable points toward the AMA National Enduro Championship after bouncing back from a mechanical issue at the third round of the series.

Mullins started the day off well finishing with the second fastest time at the first special test. He went on to earn the fastest time in the second test section which put him in the lead going into the third test. Unfortunately, he suffered a bike issue on the transfer section between tests two and three. His Factory FMF/KTM Team worked quickly to get him back in action, but unfortunately, he showed up at the third test 4 minutes late. He was docked the four minutes plus the time lost in his section to put him 34th overall after the end of the third test.

In a remarkable effort, Mullins turned impressive times throughout the final three test sections to gain back time lost. At the end of the day he was able to finish eleventh overall to earn 9 points toward the championship standings. He continues to hold the points lead as the riders head for the fourth round of the series in mid-April.

"I was definitely bummed that we had the mechanical issue today," stated Mullins. "Once we had it worked out, I knew I needed to ride as hard as I could to gain each position within reach. I am happy I was able to get back into point earning positions to earn enough points to maintain my lead heading to the next round."

KTM support rider, Grant Baylor, had a great day. The young fifteen year-old was able to ride close to the top five throughout the day to finish 5th overall. Fellow KTM rider Ian Blythe, also had a great day finishing 4th overall to earn the top KTM finish for the weekend.