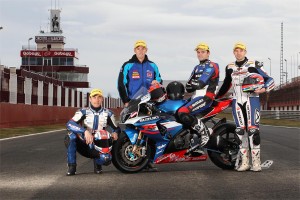 Suzuki's 12-times Endurance World Champions will run an all-French permanent team from its Le Mans, France base in the four-round series that starts on April 1st with the Bol d'Or 24 at Magny Cours.

Da Costa, who was one of the fastest competitors in last season's series - and the leading rider at the Bol d'Or and Le Mans 24-hour races where he led the French SRC Kawasaki team to victory - made his 2013 debut on the SERT GSX-R1000 at the recent Albacete Dunlop motorcycle tire test in Spain, where it was also revealed that Australian Alex Cudlin would also be joining SERT as a stand-in replacement rider this season.