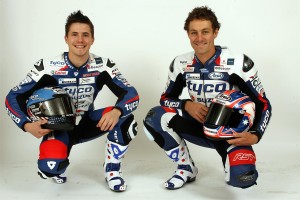 Tyco Suzuki has launched its new 2013 livery for the British Superbike and Supersport Championships at the team's presentation at Snetterton race circuit in Norfolk, UK.

The new GSX-R1000 and GSX-R600 Superbikes that will be ridden by Josh Brookes, PJ Jacobsen and Taylor Mackenzie in the hotly-contested series' feature an eye-catching lighter and brighter new paint scheme that will stand out on the grid when the British Superbike Championship kicks off at Brands Hatch in Kent next month.

Team Manager Philip Neill is delighted with the final color-scheme and is now looking forward to transferring that enthusiasm to the track on April 5-7th.

Said Neill: "After another long hard winter pulling everything together, I hope you'll agree, the 2013 Tyco Suzuki livery is a vibrant and refreshing change and should be easy to spot this season both in British championship and also at International Road Races." 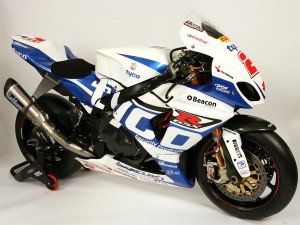 "It really is good to see the bikes looking so well and it's a credit to everyone involved" - Philip Neill, Team Manager - Photo: Paul Lindsey[/caption]

"It really is good to see the bikes looking so well and it's a credit to everyone involved, including our designers and painters for coming up with something fresh, whilst keeping in tune with the corporate colors of our title sponsor, Tyco Security Products."

"This also gives us the luxury of keeping all our racing GSX-Rs in the distinctive colors of Suzuki, who we are proud to represent once again in 2013. Hopefully the new livery can be matched by something just as sharp on track this season."

On his riders, Neill added: "Josh Brookes is now in his third year with us at TAS Racing and I'm sure that consistency will prove to be vital in our championship aspirations with him. PJ Jacobsen came in late last year and was like a breath of fresh air to the whole team, but as a BSB series rookie there will be no undue pressure put on him this season. He is a talented individual and will no doubt be looking to push into the sharp-end of the action sooner rather than later on the Tyco Suzuki GSX-R1000 Superbike."

"Young Taylor Mackenzie is in a similar position with us in the British Supersport class and 2013 will no doubt prove to be a vital stepping-stone in his career. We are looking forward to working with all three riders in both classes and very soon we will be able to give you some International Road Racing news to add to the eclectic mix here at TAS Racing and Tyco Suzuki."