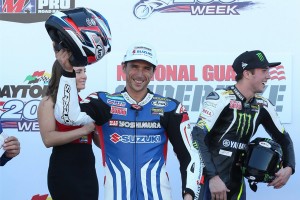 Martin Cardenas raced to his first victory aboard the GSX-R1000 at the opening round of the 2013 AMA Pro Superbike Championship at Daytona Beach.[/caption]

The Yoshimura Suzuki Factory Racing's new signing Martin Cardenas raced to his first victory aboard the GSX-R1000 at the opening round of the 2013 AMA Pro Superbike Championship at Daytona Beach, Florida at the weekend as team mate Chris Clark picked up the best result of his AMA Pro Superbike career.

For Yoshimura Suzuki's Cardenas, the weekend was a successful one from the start: The Colombian rider kicked-off the weekend by qualifying on the front row of the grid and getting good starts in both Superbike races. In the first 15-lap race, Cardenas pushed hard on every lap and was there to capitalize on other riders' mistakes and finish second. In the weekend's second race, Cardenas redoubled his successful efforts from the day before, turned in a flawlessly aggressive ride; and captured the win.

Said Cardenas: "I'm very happy and I want to thank the Yoshimura Suzuki team for giving me the opportunity to race for them. The weekend was good for us. In Friday's race, I got a good start on the Yoshimura Suzuki GSX-R1000 and got into second. I planned to make the pass for the win on the last lap but I made a mistake and that didn't work out for me. On Saturday, I was able to get into the lead and I tried to keep a good pace and not make mistakes. We ended up winning and now I'm looking forward to Road America." 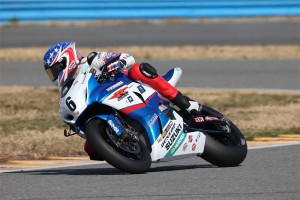 Likewise, Clark left the famous Daytona banking on a high note. In the weekend's first race, Clark turned in 15 solid laps to pick up his first-ever top-five AMA Pro Superbike result. The next day, he followed up that performance with another respectable race to bring home a sixth-place finish.

"It was good to get the first race out of the way," admitted Clark. "I was able to get the best finish of my career with fifth, so I was really happy about that. It was a little tough the first few laps because I didn't get a good start but I was able to get around some guys. I made a few little mistakes in the middle of the race but overall I was happy. In the second race, I finished sixth and we wound up fifth in the points so this was the best race weekend I've ever had. Now I'm just excited to get to Road America."

The Yoshimura Suzuki Factory Racing team's next event of the 2013 AMA Pro Superbike Championship series is at Road America in Elkhart Lake, Wisconsin on May 31-June 2nd.


Michael Jordan Suzukis On The Pace At Daytona 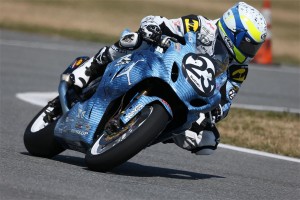 Although Eslick admittedly struggled in qualifying, he pulled out all the stops when it came race time. In the weekend's two 15-lap Superbike events, the Jordan Suzuki rider put his head down and overcame less-than-stellar starts to finish in the top five. In race one, Superbike rookie Eslick finished fourth and he brought home fifth in race two.

Said Eslick: "The Jordan Suzuki GSX-R1000 was running great at Daytona. I felt like I was knocking some of the cobwebs off from the winter. In the second race, 'Rog' and I ran around by ourselves for the last half of the race, but that's good in its own way because we're learning stuff riding with each other. Hopefully, at Road America we'll come out and fight for a win." 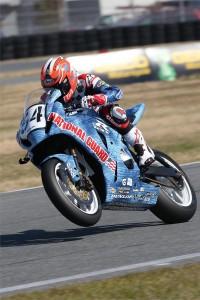 National Guard Jordan Suzuki team mate Hayden shined brightly in Daytona qualifying and picked up a front-row position on the starting grid. Unfortunately, he suffered a minor get-off in race one and was unable to finish. In race two, however, Hayden turned in a solid performance, dicing back and forth with Eslick and eventually finishing fourth.

"Danny and I had a pretty good race and we struggled with the same things," said Hayden. "Fourth isn't where we want to be and we need to be a little stronger for the next one. But we got out of here with some points and we'll move on. We're a lot better than fourth; we had the speed in practice and qualifying, and we just had some bad luck in the races. Hopefully, we got all of that out of the way and I can't wait for Road America."

"We started off this weekend not really sure what was going to happen," said Alexander of SuperSport. "The National Guard Celtic Racing Suzuki GSX-R600 was good all weekend but we didn't have a good qualifying effort to put us up on the front row. I'm happy with third, especially after making my way up from 11th." 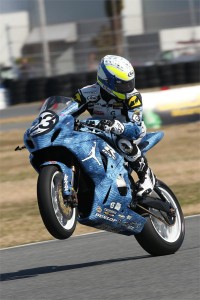 Of his performance in the Daytona 200, where he ran in a podium position for several laps during the lengthy race, Rispoli added, "I'm really happy. For the first 19 laps, we were all battling and it was really fun to race with those guys. The National Guard Celtic Racing Suzuki GSX-R600 was running really strong and we were right there drafting with the boys up front. Now I'm looking forward to Road America. I've done really well there in the past."

The Michael Jordan Motorsports team's next event of the 2013 AMA Pro National Guard Superbike Championship series is at Road America in Elkhart Lake, WI, the weekend of May 31-June 2. 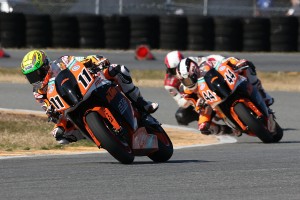 Factory KTM/HMC Superbike Team riders Taylor Knapp and Chris Fillmore finished 9th and 10th respectively at the opening round of the AMA Pro SuperBike Series held at Daytona Raceway after a 15 lap drag race to the finish.

Knapp and Fillmore were sitting in 11th and 12th place respectively in the opening laps of the race. On the fifth lap, Knapp, in his debut race on the KTM, made a pass on Aaron Yates to move into the top ten. Fillmore quickly followed to move up a position on the next lap. The two KTM riders then began a battle against each other that would last for the remaining laps. Throughout the next nine laps, the KTM riders swapped positions four times crossing the finish line side by on multiple occasions. On the final lap, Yates came back into the battle and all three riders went into the last corner three wide.

When the checkered flag flew it was Knapp who inched out Fillmore to take 9th place while Fillmore held off Yates to finish inside the top ten.

"I am happy that Knapp and I both were able to consistently click off quicker lap times as the race continued. We have had a few issues this week during the qualifying sessions so it has been a good day to know that myself and my teammate were both able to finish the race strong and earn two top ten finishes for the team," stated Filllmore after the race. 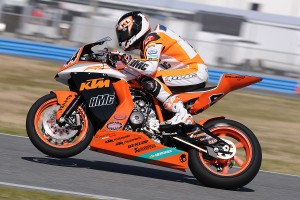 When the checkered flag flew it was Taylor Knapp who inched out Fillmore to take 9th place - Photo: Brian J. Nelson[/caption]

His teammate, Knapp, stated, "It was great to get the first race under our belt. I am happy that Chris and I rode well today and that there were no issues. This is a tough track and we are really looking forward to some of the curvier tracks later in the circuit. We still have one more day left, so we will work hard and hopefully improve tomorrow."

Both riders will line up again tomorrow afternoon for the final race of the weekend - Day 2 of Daytona Speedway AMA Pro SuperBike. 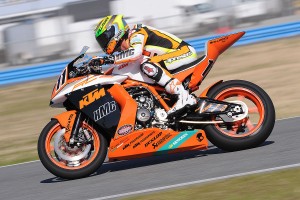 Factory KTM/HMC Superbike Team rider Chris Fillmore improved his result at day two of the first round of the AMA Pro SuperBike Series held at Daytona Speedway when he crossed the finish line in 8th place. His teammate, Taylor Knapp, was not as fortunate and suffered a mechanical halfway through the race which caused him to not finish.

Fillmore started the race in 11th place and passed Aaron Yates on the second lap to takeover 10th position. He clicked off consistent lap times through the remainder of the race and was able to gain two positions after Josh Hayes and David Anthony withdrew from the race with mechanical issues. When the checkered flag flew, he was positioned in 8th place to beat his 10th place result from the day before.

"Today went really well for us," stated Fillmore. "Last night we were able to make a few minor changes to our set-up that helped a lot for today's race. I felt more comfortable on the bike and was happy with my result."

Knapp had a rough day from the start after he suffered a crash in the morning qualifying session. "It was really cold out in the morning and the tires on my bike where not good for the cold surface and I just lost control. The bike I was riding was my race bike from the day before and the team was not able to repair it in time so I had to ride my back-up bike for the race," commented Knapp. 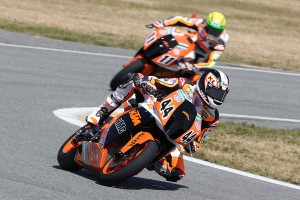 Knapp was late to the start for the warm-up lap after struggling to start his back-up bike and was forced to start in dead last. He quickly moved up two positions on the second lap but soon after began to suffer from a clutch issue which eventually caused him to DNF. He was credited with 17th overall.

"I am bummed about not finishing this race," commented Knapp. "But I am lucky I wasn't injured earlier today and I am happy that my teammate was able to get a good result. Daytona is known for being really rough on bikes. There were six of us who didn't finish today and that is not typical for a normal Superbike race. I am really looking forward to the next round at Road America where I think we can shoot closer to a top five."