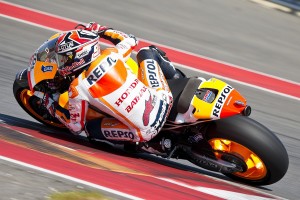 Day two of MotoGP testing came to a close at the Circuit of the Americas in Austin, Texas, and when it did, some familiar face were on top of the timesheets.

Rookie Marc Marquez clocked the fastest time for the second consecutive day, edging fellow Honda riders Dani Pedrosa and Stefan Bradl as well as Yamaha competitor Jorge Lorenzo. All riders showed improvements in their times, however, and are setting up what should be an intense showdown when the motorsports series returns to Austin April 19 to 21.

Before that second round gets underway, riders will have to finish testing their machines to work out any possible kinks and prime themselves to compete during the official season.

"I gradually improved with every stint ..." Marquez said. "We did a great job today, and the team is really helping me a lot. I am learning so much these days - most of all with the electronics."

Lorenzo and his teammate Valentino Rossi packed up shop, having collected all the information they needed in the first two days of testing. The three Honda riders, Pedrosa, Marquez and Bradl, will return to continue improving every aspect of their racing gear before the season opener April 7 in Qatar.