KTM Extends Contract With Kurt Caselli For Dakar And SCORE/Baja 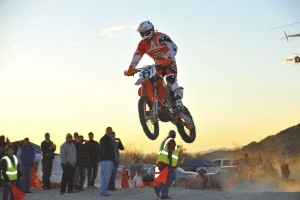 KTM Motorsports is excited to announce the extension of Factory rider Kurt Caselli's contract to race the Dakar Rally and SCORE/Baja events through year 2016.

Caselli, who has been a member of the KTM Factory team for the past 11 seasons, is excited to stay with his orange family for an additional three years while also adding new events to his schedule.

The 29 year-old rider raced his first Dakar Rally in January 2013 where he impressively won two stages of the event. His speed, eagerness to learn and ability to quickly adapt to the surroundings caught the eye of KTM's Director of Racing, Pit Beirer. Together, Beirer and Factory FMF/KTM Team Manager Antti Kallonen, reached an agreement that would allow Caselli to represent the Red Bull KTM Factory World Rally Team for the next three years while also continuing his US based SCORE/Baja racing efforts as a member of the Factory FMF/KTM Team.

In addition to racing the Dakar Rally and SCORE/Baja events, Caselli will also race select World Rally Championship rounds to help him prepare for the Dakar event. "I am very excited for the opportunity to sign a multi-year deal with KTM to race a different discipline than I have in the past. It is a new challenge for me that I am excited to take with the people that I consider to be my second family," commented Caselli. "I am also thankful that in addition to signing with KTM for another three-years, I will also be able to keep my main sponsors that have been by my side for the past 10 years. Their loyalty means a lot to me as I take the next step in my career."

Factory FMF/KTM Team Manager, Antti Kallonen, commented, "The entire team is excited for Kurt and I am very thankful that we will be working with the KTM Factory Team in Austria at a closer level. It is always exciting when a U.S. rider can transition successfully into the world rally events. We are very proud of Kurt and excited to have him represent our country on a world level. While the Dakar Rally is a big undertaking we will still continue our efforts to capture the SCORE/Baja Series Championship and are grateful to have Kurt as a member of that team."