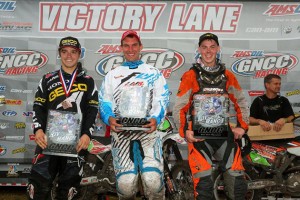 Andrew DeLong took a commanding win at the opening round of the GNCC XC2 Championship in River Ranch - Photo: GNCCracing.com[/caption]

Andrew DeLong and the Fred Andrews Racing Husqvarna team sent a strong message to their fellow XC2 competitors at the opening round of the Grand National Cross Country (GNCC) Series by taking a commanding win at the River Ranch, Florida event. DeLong finished the three-hour race with over a one-minute lead, having worked his way into fifth overall, demonstrating that he is a clear threat to the XC2 title this season.

DeLong had his work cut out for him after crashing in the second turn and heading into the first lap nearly dead last. "We have seen AD come from last and win so we were not too worried," commented team manager Fred Andrews. "Three hours in the sand is a strong man's race."

Andrew certainly proved to be the strongest, despite a solid challenge from factory pro motocrosser Zach Osborne, who held the lead until lap four. After a quick pit stop, the two went toe-to-toe for the XC2-class lead.

"Joe [Maurer, FAR mechanic] told AD, 'it's time to put the hammer down!'" Andrews said. "AD took off out of the pits with Zach on his rear fender and had his TXC250R flying!"

DeLong relied on his training and was able to push hard at the end of the race, building a significant lead by the time the white flag came out. "I have been busting my butt training," DeLong said. "I was not worried about getting tired today. I just followed them after I caught up from my crash in turn two. We all worked hard and it paid off. My TXC250R was awesome!"

Andrew wasn't the only DeLong got on top of the podium in Florida - FAR Husqvarna support rider Craig DeLong claimed the 4-stroke A Lites victory aboard his TXC250R. Teammate Nick Davis made an effort to race, but is still nursing an injured foot. But he and the rest of the FAR Husky team plan to be ready for round two of the GNCC Series this weekend in Georgia.