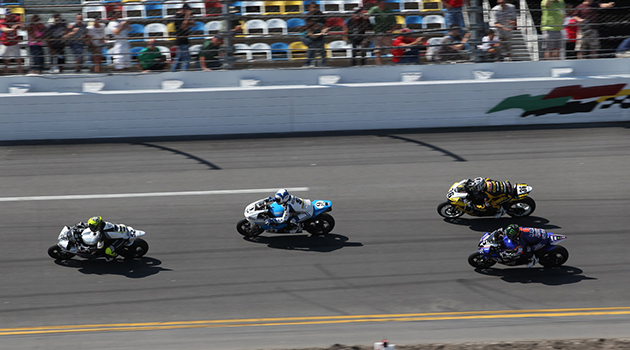 The most historic motorcycle race in America has constantly evolved over the years, beginning as a race held on public roads and the beach to a contest held on the famed high banks of Daytona International Speedway. The machinery has changed over the years and the AMA Pro GoPro Daytona Sport Bikes have delivered close and exciting battles in recent seasons. The final outcome has often came down to the sprint to the line on the final lap, with the draft playing a major role after 199 miles of jockeying for position.

With reigning champ Martin Cardenas moving to AMA Pro National Guard SuperBike this season, the face of the series has changed. As a two-time champ, Cardenas could always be counted on to fight near the front.

The class has plenty of up-and-comers vying for glory along with a nice mix of veteran riders. The preseason favorites to replace Cardenas at the top include Cameron Beaubier of Yamaha Extended Service/Graves/Yamaha and Dane Westby of GEICO Honda.

After an early injury, Beaubier rose to the front last season and battled with Cardenas on numerous occasions, winning his share of the battles along the way. Beaubier is fast on the Yamaha and proved his prowess last year. The Californian's smooth and precise style has served him well in the middleweight class. His biggest issue this season will be staying healthy in order to gain maximum points for the championship.

Westby earned second in the championship last season. The Honda-mounted rider (a change for this season) continued to hone his game throughout the year in 2012 and the consistency paid off in the points. "The Wolverine" is known for his hot streaks in which he's almost untouchable. Westby has won Daytona SportBike races previously, so the next step for the Oklahoman is another championship run.

Last year's winner, Joey Pascarella, returns to the scene on a Triumph. The Californian will attempt to defend his win on the Riders Discount Racing Triumph Daytona 675. Last year, Pascarella rode a masterful race, showing good form to stay at or near the front before crossing the line and winning the biggest race of the year.

Another star from last year's race is Jason DiSalvo. The veteran put on a spirited charge after issues early in the race and nearly won. DiSalvo will once again race for Latus Motors Triumph. The English brand last won the 200 in 1967 with Gary Nixon and this year has arguably been their best hope since then.

Bobby Fong has joined the Triple Crown/RMR squad for 2013. Fong has shown he can charge hard and run up front in Daytona SportBike and is one of the most aggressive riders in the class.

Among the veterans looking to make his mark is former Daytona 200 winner Jake Zemke who will be riding the Desmo Veloce Ducati. Zemke won the race in 2006 and will fill in for the injured Garrett Willis.

Another young rider of interest is Garrett Gerloff. Beaubier's teammate on the Y.E.S./Graves/Yamaha squad, Gerloff's 2012 was a washout after an injury at Daytona. The Texan is one of the youngest riders in the field and has impressed in his limited time with the Graves squad.

Two rides with potential to make a Pascarella-like surprise in this year's race are Benny Solis and Huntley Nash. Solis, on the M4 Broaster Chicken Honda, has flashed potential in AMA Pro Motorcycle-Superstore.com SuperSport. Nash, on his LTD Racing bike, is also entering his third year in Daytona SportBike.

The AMA Pro GoPro Daytona SportBikes will use the 3.51-mile long course once again.

First practice for the race is scheduled to begin at noon on Thursday, with qualifying scheduled for Friday. The 57-lap 72nd running of the DAYTONA 200 will begin at 1:00 p.m. local time on Saturday.

Live Timing & Scoring of all on-track sessions will be available at http://www.amaprolive.com/rr/.