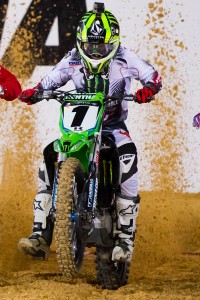 Ryan Villopoto is the reigning champion of AMA Supercross, and he proved why he's the one to beat this year after claiming his fifth motorsports win of the season in Daytona, Florida. The Kawasaki rider got off to a fast start and only wavered a bit during the opening lap, when KTM rider Ken Roczen and Honda's Justin Barcia squeaked in front of him. By the end of the next few laps, however, he regained the top position and cruised to the victory.

"Daytona is a unique place to race and to win here is pretty awesome," Villopoto said. "It's not like any other race, so if you can win here it shows you are one of the best. Sometimes it doesn't go as planned but I'll take it. It feels really good."

The win also moved Villopoto into first place in the points standings, supplanting Davi Millsaps from the top spot for the first time this season. He now has a 2-point advantage over the Suzuki rider and will look to extend that lead at Lucas Oil Stadium in Indianapolis, Indiana, during the next round. 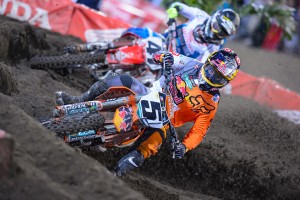 Ryan Dungey moved up from his fifth place start to second place before the halfway mark of the race - Photo: Simon Cudby[/caption]

Dungey and Roczen were placed in heat number one. Both riders got off to great starts with Roczen sitting in third position while Dungey was two spots back in fifth. Roczen rode strong on the first two laps to catch the second place ride of Broc Tickle. He made the pass for second at the end of lap two and set his focus on the led KTM ride of Andrew Short. Roczen battled with Short for the next two laps before he found a line around Short and made a pass for the lead. Roczen then led the next three laps holding off a hard-charging James Stewart as well as his Red Bull KTM teammate, who had moved into third.

With one lap to go, Roczen held the lead. As the riders entered the whoop section, Roczen made a mistake which allowed Stewart to make a pass. Roczen fought back but was unable to get around Stewart before the checkered flag. Roczen held on to finish an impressive second place in the heat while Dungey was right behind in third. 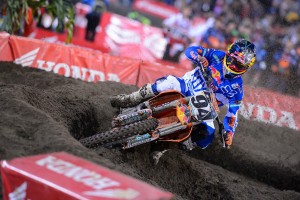 When the gate dropped for the main event, Roczen launched off the gate to a second place start. His teammate, Dungey, was not far behind in fifth. As the riders neared the end of the first lap, Roczen inherited the lead after Ryan Villopoto went off course. Roczen continued to lead for two more laps before losing the lead back to Villopoto. Roczen fought hard for a top position but eventually fell back after struggling with arm pump. At the end of the twenty lap main event, Roczen was able to hang on for a top ten finish taking home seventh overall.

Meanwhile, Dungey moved up from his fifth place start to second place before the halfway mark of the race. He continued to turn impressive times throughout the main event to earn a podium finish and secure important points toward the championship hunt.

"It's pretty rough track tonight," commented Dungey. "Luckily, we got my suspension dialed in after practice and my bike worked really well. I got off to a great start and was able to put myself in a good position early on. It feels great to get back up on the podium." 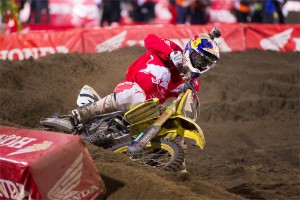 James Stewart struggled with his tire choice in the 450 class Main Event, but still managed to bring home an eighth-place result.[/caption]

Yoshimura Suzuki Factory Racing's James Stewart turned in a respectable performance in less than ideal circumstances at round 10 of the 2013 AMA/ FIM Supercross Championships at Daytona International Speedway in Daytona Beach, Florida on Saturday night.

Although he continued his trend of tremendous speed in qualifying and his heat race, Stewart struggled with his tire choice in the 450 class Main Event, but still managed to bring home an eighth-place result.

Traditionally, the sandy, motocross-style Daytona track has been a good one for the Floridian, and this year started out no differently. He qualified second fastest in the day's practice sessions and went on to race his Yoshimura Suzuki RM-Z450 to his sixth heat race victory of the year. Unfortunately, after winning the heat race, Stewart chose a different tire and, as a result, struggled mightily in the Main Event, but still rallied after a rough start and a get-off to salvage a top-10 finish.

"All day long, I felt pretty good," said Stewart. "I qualified second in practice and I was happy about how I rode in my heat race. But then I made a pretty significant change with the tire between the heat race and the Main Event and I completely went the wrong way. In the start of the Main, I got kind of cross-rutted coming out of the gate, but I was able to sneak around the inside and came out fourth or fifth. But I struggled from lap one to lap 20. The Yoshimura Suzuki RM-Z450 worked great, I just picked the wrong tire and that was that. But we'll be back. I want to thank the Yoshimura Suzuki team, the last four races have been really good for us and I hate it that we got these results because of a decision that I made. I felt great going into the race and my endurance was good. But we'll be back, there's still a lot to fight for this year and we'll get 'em at Indy."

Yoshimura Suzuki Factory Racing's next event is the 11th round of the 2013 AMA/ FIM World Supercross Championships on Saturday, March 16th at Lucas Oil Stadium in Indianapolis. 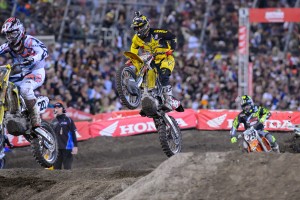 "Well, worst race of the season so far. Got that out of my way." - Davi Millsaps[/caption]

It's always a pleasure when the Supercross Series heads to Daytona Beach, Florida. There's always a good chance that the weather will be perfect and it certainly was this year. There is the convenience factor that the airport is literally across the street from the speedway and the hotel is next door. One of the real highlights though being able to be in town during bike week. The hub of the event is under 5 miles from the track and located right on what is dubbed "the most famous beach in the world. There are certainly perks to this industry and being able to break away and enjoy things like this is absolutely a privilege.

The track in Daytona is sets itself apart vastly from any other stop on the tour. It's almost like an outdoor national in the middle of the season. Teams have to do a lot of testing with suspension etc. just for this one race. It's that different. Perhaps not as much so as when there actually was an outdoor during the season at Gatorback MX in Gainesville, FL however. It's more like a Hybrid SX/MX track and a breath of fresh air for onlookers including those in the industry.

Daytona was not a great night for Davi Millsaps. In practice he was right where he should be but that was pretty much the highlight of the night. He had an uncharacteristically bad start in his heat race. He rode good and made up a lot of ground though to salvage a decent gate pick for the main. Then when the gate dropped for the main event, he found himself buried in the pack again after being pushed very wide in the first turn. It didn't help that a couple laps later he had a bit of a crash in the very deep sand. Falling in the sand presents more adversity than your typical tip over. You get sand all over your grips and in your gloves, then spend the next few laps trying to adapt. Davi was able to catch and pass a few people throughout the main to save some points. Going into next weekend he will not be the points leader for the first time this season. Millsaps still only sits 2 points behind however and it's just simply time to regroup. It's now his turn to play a little bit of catch up. Every fairy tale has it's adversity but the magic is not gone. Davi will look to find his form next week and continue to build towards a happy ending this season.

"Well, worst race of the season so far. Got that out of my way. Now it's time to climb my way back up to the top. It's Supercross, it's gonna happen. Other guys had bad races and now I just got rid of mine." - Davi Millsaps 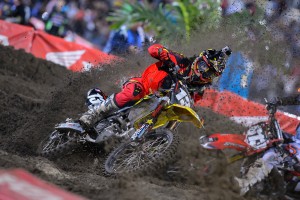 "It was a gnarly track. Daytona is always gnarly." - Blake Wharton[/caption]

Blake Wharton also had a bit of an off week. He still remained consistent with a 5th place finish, but wasn't satisfied with his result. Sometimes you are just uncomfortable on the bike. It happens to everybody sometimes. When you have a day like that, it could be a whole lot worse than it was. Blake was able to leave healthy and gain some decent points to stay in title contention. Whart would love nothing more than to return to the podium next week in Indianapolis where he was victorious a year ago.

"It was a gnarly track. Daytona is always gnarly. Technical, dark, shadowy with deep sand. It definitely wasn't my best night. I was off for sure. If this can be my worst night and still be at least in the top 5 that's alright. It was just an average night for me. I didn't get the starts I would have liked either. Next weekend is Indy and I won that last year so that's always good." - Blake Wharton

Next week's race in Indiana will be redemption a week for both Millsaps and Wharton. Davi will strive to rebound from a 10th place and try to get his red plate back. Blake will try to repeat his 2012 performance and chip away at the points gap between himself and first place as well. 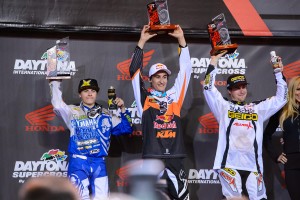 Musquin was placed in heat number one where he got off to a third place start as the riders rounded the first corner. He made a pass on Vince Friese for second place on lap two of the heat. He remained in that position for the remaining laps of the heat to easily transfer to the main event.

When the gate dropped for the main event, Musquin launched off the line to put his KTM 250 SX-F up front early as he grabbed the holeshot to lead the first lap. Musquin used the momentum from his good start to stretch his lead out front. He went on to lead every lap of the 15 lap main event to claim his first 250SX career win. Not only did he win his first Supercross main event, but he did so in a dominating fashion crossing the finish line 8 seconds ahead of his competition even after celebrating with a fun heel-clicker. 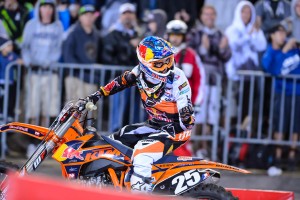 Marvin Musquin's win at Daytona moves him up one position in the overall point standings to third overall - Photo: Simon Cudby[/caption]

"Obviously I had a lot of fun riding this track," commented Musquin after the race. "I knew everyone was going to be fast so I stayed calm out front and tried to have fun. I am so happy to get this win and to also gain more confidence knowing that I was pulling away from them each lap."

Musquin's win at Daytona moves him up one position in the overall point standings to third overall.