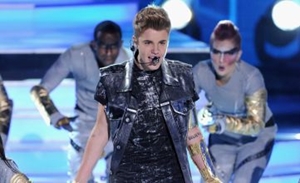 What do you get the international pop star who has everything? If you're shopping for Justin Bieber, the answer is a customized motorcycle designed by some of the most renowned manufacturers in the world.

The singer's father, Jeremy Bieber, reached out to Motovan, the Canadian importer of MV Agusta motorcycles, to have a special bike created.

"I would like to thank MV Agusta and Motovan as it has been a pleasure to work with them on this very special project," Jeremy Bieber said. "Their quick response for the delivery of this exclusive Italian motorcycle gave us the time needed to personalize the F3 675 into what it is today."

Personal touches added by Canadian designer Lucent AC include a series of Batman details. The motorcycle is outfitted with black matte paint and sportbike accessories, as well as Batman logos and Bieber-centric additions, such as an inscription on the gas tank that reads, "35 mil. followers," a shout-out to the singer's Twitter fans, Zap2it reports.

For his 18th birthday, the pop star got a special edition Ducati 848EVO, Ultimately Motorcycling reports. But his newest MV Agusta machine reaches higher speeds of more than 170 miles per hour and hopefully comes with some paparazzi-proof motorcycle apparel.