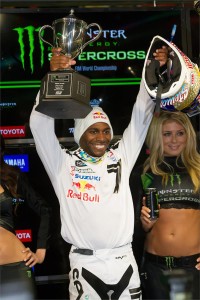 James Stewart got off to a fast start and held onto the lead for every one of the 20 laps of the race.[/caption]

Monster Energy AMA Supercross took its action to the East Coast, where almost 70,000 spectators watched James Stewart get his first motorsports win of the season in Atlanta's Georgia Dome. The Suzuki rider got off to a fast start and held onto the lead for every one of the 20 laps of the race, holding off a late push from Ryan Villopoto and Davi Millsaps, who finished second and third, respectively.

"I mean what can I say, we won tonight," Stewart said. "It [means] a lot, this whole season has been going crazy and to get a victory and to get a start, it was almost a perfect day. I was fastest in practice, fastest in the Heat Race, I got the hole-shot in the main event and led every lap."

Stewart struggled with injuries and mechanical issues for the past month, but he finally managed to turn in a winning effort - making 2013 the ninth season he has been victorious in an event.

While the win gave Stewart a bump in the standings - he now sits in eighth place - Villopoto capitalized on his second-place time to pass Ryan Dungey for the number two position in the rankings. He is now only 22 points behind Millsaps. 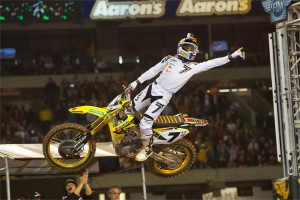 James Stewart took the Holeshot and rode flawlessly to lead all 20 laps, notching up his 45th career premier class win.[/caption]

Yoshimura Suzuki Factory Racing's James Stewart dominated the eighth round of the AMA/ FIM World Supercross Championship at Georgia Dome in Atlanta on Saturday night in front of a packed house of 70,000 fans.

Stewart trounced the competition in qualifying, in his heat race and the 450 class Main Event and became one of just three racers who have gone nine straight seasons with a win in Atlanta.

His day in Atlanta started strong, posting the fastest qualifying times during the day's practice and then he grabbed the Holeshot in his eight-lap heat race and led all laps to take the win. Similarly, in the Main Event, Stewart took the Holeshot and rode flawlessly to lead all 20 laps to the chequered flag to notch-up his 45th career premier class win.

Said Stewart: "What can I say, we won. This whole season has been kind of crazy, but it was basically a perfect day. I was fastest in qualifying, I holeshot the heat race, I holeshot the Main Event and I led every lap I was on. I'm not going to lie, I was a little nervous because I haven't been out there in a while, but I felt good and I was just trying to stay in my head and focus. I have to give it up to the Yoshimura Suzuki team; they've been working so hard and they've stood by me in this up-and-down year. Now I'm looking forward to building on this momentum and heading to St. Louis."

Yoshimura Suzuki Factory Racing's next event is the ninth round of the 2013 AMA/ FIM World Supercross Championship on Saturday, March 2nd at the Edward Jones Dome in St. Louis. 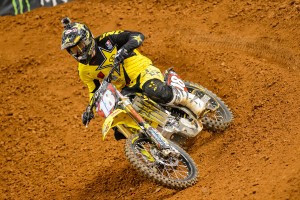 Davi Millsaps took home 3rd, allowing him to retain the red plate as series points leader with a comfortable lead.[/caption]

The AMA supercross series hit its second East coast stop at the Georgia Dome in Atlanta on Saturday. Davi Millsaps took home 3rd in the 450 main event in front of a crowd of 70,000 people, allowing him to retain the red plate as series points leader with a comfortable lead. He is still the only 450 rider to have the red plate this season.

Davi Millsaps once again came out looking amazingly smooth in practice posting the 4th fastest qualifying lap time on the day battling with the other fast five usual suspects. He then looked very impressive in his heat race. Davi got a good start and simply just pulled away. Amassing a solid 7 second lead in the short 8 lap heat race.

His start in the main event was not nearly as good, but that is going to happen sometimes. It made a little extra work for Millsaps, but he made his way into 3rd quite quickly and efficiently. The gap between himself and 2nd place was already a fairly significant margin, however. It was evident that Davi was catching the leaders but small mistakes hampered his progress.

The track was pretty slippery and going at that rate of speed it's tough not to have some bobbles. By main event's end, he closed the distance considerably, which is an achievement in itself and should build confidence. Millsaps again found himself on the podium with a 3rd. Being on the box 7 times out of 8 races is incredible and Davi once again added to his points lead now sitting 22 points ahead of Ryan Villopoto.

"I'm feeling a little better this week. I still have a sinus problems, I don't know what it is. It's pretty bad and I've been taking stuff for it all day. It get's to the point where I can't see very well and I'm definitely having trouble breathing. All in all the cold is gone but these symptoms are just lingering. I'm pretty over it and I'm not gonna let it hold me back anymore. [James] Stewart and [Ryan] Villopoto just rode a really good race and I didn't get the best start. I was trying. I was just making little mistakes everywhere. I was worried about them and [Justin] Barcia. I need to quit doing that and just worry about myself. All in all I'm just pumped to be on the box again and go into St. Louis." - Davi Millsaps 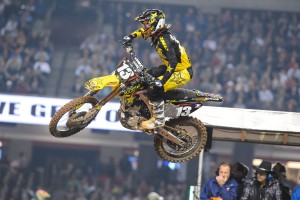 Teammate, Blake Wharton, had a tough start to the East Coast 250 Series in Dallas but was able to collect himself and finish a commendable 2nd place. This week he had a much more successful heat race finishing in 3rd and qualifying easily. Wharton got a good start in the main and spent the majority of the race riding by himself. He rode a clean and smart race as he quietly finished a solid 4th place position.

After two rounds, Blake finds himself 3rd place in overall championship points. Just as Davi has done in the 450 class, Wharton will look to stay consistent and be in the hunt for a title until the end.

"Today was the 2nd round, east coast in Atlanta. Track was pretty good, it definitely had some different lines. I don't think anyone can argue that. The dirt was pretty good. In both my heat and the main I got pretty decent starts. This week was better cause I didn't have to go to the LCQ but I didn't do as good either. It was like a trade off. The end result wasn't as good but it was alright. I rode up front for a little while but I rode kind of tight. I'm glad I salvaged a 4th." - Blake Wharton

Rockstar Energy Racing will head to the Edward Jones Dome in St. Louis next week. Millsaps will aim to continue his string of podium finishes and extend his points lead. Wharton will set his sights on getting back on the podium and tightening up the championship chase. 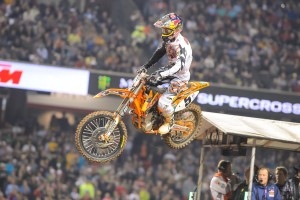 Ryan Dungey finished sixth overall after a rough start at the eighth round of the Monster Energy Supercross Series - Photo: Simon Cudby[/caption]

Dungey was placed in 450SX heat number one where he earned a fifth place start. Dungey caught Mike Alessi and made a pass for fourth on the fifth lap of the race. On the final lap Dungey suffered a small crash and lost a few positions. He recovered in seventh position which is where he finished earning a transfer spot to the main event.

When the gate dropped for the main event, Dungey jumped out to a top ten start. He was sitting in seventh after the first few corners. On the sixth lap of the race he made a pass to take over sixth position. He quickly reeled in the fifth place ride of Trey Canard and the two battled for that spot for the remainder of the race. Unfortunately, Dungey was unable to make the pass and had to settle for sixth place.

"Unfortunately, I didn't get the best start and I wasn't able to put myself in the best position for the overall tonight. I am definitely disappointed in my result but the five guys ahead of me rode really well tonight. I know what to work on and will come back stronger for St. Louis," stated Dungey.

Red Bull KTM Team Manager Roger DeCoster, commented, "It wasn't a great night for Ryan. He rode well but the top riders are making no mistakes and we need to work on improving his starts to put him in a better position to fight for the overall." 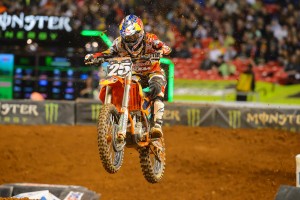 Red Bull KTM Factory rider Marvin Musquin finished third overall at the second round of the East 250SX Supercross Series in front of a packed stadium at the Georgia Dome.

Musquin was placed in heat number two where he jumped off to a second place start. Four laps into the race, Musquin missed a triple jump which allowed Wil Hahn to take over the position. Musquin quickly regained his speed to catch back up to Hahn. Musquin followed Hahn's aggressiveness as both riders caught up to the lead ride of Zach Bell and collectively made a pass on him in the final lap of the heat. Hahn went on to take the win while Musquin finished second to earn a top spot in gate selection for the main event.

Musquin started the main event in fifth position and quickly passed Justin Hill to take over fourth place. On the third lap he made an inside pass around a corner to pass Blake Wharton for a podium position. Once in third he maintained his position for the remaining laps to earn his first podium of the season.

"The track was fun today. It was very technical and I enjoyed racing at the Georgia Dome. I had great practice times and I had a decent start in the main, and of course, it is nice to be back on the podium. Unfortunately, I just wasn't able to catch up to the leaders today but I will come back stronger next week and hope to continue to improve," commented Musquin.