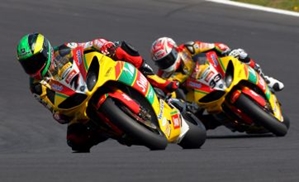 World Superbike is making a triumphant return to the motorsports world Feb. 24 when all competitors will descend on Phillip Island, Australia, as the first of 14 rounds get underway. With last year's champion, Max Biaggi, retiring in the offseason, the top spot is anyone's for the taking.

All eyes will be on veteran rider Carlos Checa at the start of the race. The Spaniard surprised many when he took the top time at last weekend's test, surpassing big names like Marco Melandri. He also has a strong track record at Phillip Island, which should make him a top contender for the win.

Tom Sykes, who came out of nowhere to finish second overall last season, will be racing despite having a hairline fracture in his arm, News AU reports. The accident occurred just a few laps into a private testing session, leaving the rider without a lot of practice on his Kawasaki, but he will be on the track to the start the season anyway.

"That's not the perfect start we were looking for, but sometimes these things are sent to try us," Sykes told the news source. "... There's obviously a crack in the wrist and the ribs are a little bit tender, but we'll get on with the job."