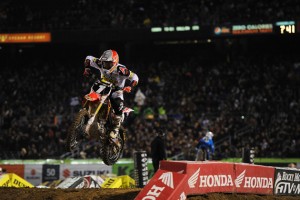 Eli Tomac's early success moved him up the ranks and into the 450 class, where he will start racing this weekend - Photo: InsiderMX.com[/caption]

Eli Tomac has been tearing up the 250 West class in the Supercross competition, winning four out of the six races that have occurred so far this season. His early success moved him up the ranks and into the 450 class, where he will start racing this weekend.

The Honda rider will be making his 450 debut at the Georgia Dome in Atlanta. This gives Tomac the chance to gain some experience against tougher competition while the 250 series takes a break before returning for the final three races.

"I'm fired up and excited to race this 450," said Tomac, as quoted by Cycle News. "I don't think I could have picked a better place to make my debut because Atlanta is always a packed house and the fans are loud. I love that crazy feeling you get in that building."

If all goes well for Tomac, motorsports fans may see him race permanently in the 450 class in 2014, Alli Sports reports. He is expected to contend for a podium position almost immediately, so fans should keep an eye on him when he brings his talents to Georgia.