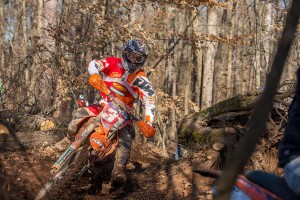 Charlie Mullins took the win at the opening round of the AMA National Enduro Series - Photo: Shan Moore[/caption]

Factory FMF/KTM rider Charlie Mullins took the win at the opening round of the AMA National Enduro Series aboard his new KTM 350 XC-F.

Mullins made the switch to the four-stroke for the start of the National Enduro Series and it proved to be a great move for the former National Enduro Champion. He started the day off well winning the first two special tests in a dominating fashion. His big margin wins in the first two tests helped him set the pace for the remainder of the day that would eventually lead to his first victory of the season.

Never outside of the top three, Mullins finished 2nd in the third and fourth tests and then finished 3rd in the final two tests. He caught his brake pedal on a large tree root early in the fifth test which caused him to lose his rear brakes mid-way through that test. Luckily, he was still able to maintain a decent pace and finish that test inside the top three to avoid losing a large amount of time to the rest of the pack.

At the end of the six special tests, Mullins walked away with the win by a 39 second margin. "I had some bad luck last season and I am really looking to turn things around this year," remarked Mullins. "I have been working really hard during the off season and it is great to be back racing and finally 100% healthy."

Mullins teammate, reigning National Enduro Champion, Steward Baylor, is still recovering from a wrist injury sustained during last year's race competition. The first round marked his first time back on the bike in 14 weeks. Baylor attempted to ride the first three tests but struggled with his wrist and decided to pull off in order to avoid a possible crash that could injury him further. He will undergo one final surgery on his wrist and then make a comeback to the series once he is completely healed. 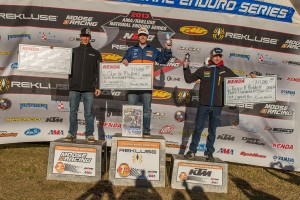 Both Nick Fahringer and Russell Bobbitt took the podium in the opening National Enduro round - Photo: Shan Moore[/caption]

Husaberg riders Nick Fahringer and Russell Bobbitt finished 2nd and 3rd respectively at the opening round of the AMA National Enduro Series hosted by the Cherokee Cycle Club.

The cold temperatures and slick course did not deter the two Husaberg riders from turning impressive times throughout the six special tests. Fahringer finished 2nd in the first two tests, 3rd in test number three and then won the fourth test. He took the momentum of his win in the fourth section to finish 2nd in the next test and again take a win in the final test to put his Husaberg TE 300 in contention for the win. Despite winning the final test session, he came up just 39 seconds short of the win. Bobbitt, who collected a win in the fifth test, continued to get stronger as the day progressed and was able to move up to podium position by the end of the day.

The third member of the Husaberg squad, 8-time National Enduro Champion, Mike Lafferty, struggled early on which keep him out of the podium fight. Lafferty was able to bounce back in the final tests to finish 5th overall for the day.

"We are very proud of our Husaberg riders today," commented Husaberg Factory Team Manager Antti Kallonen. "Fahringer rode a strong race as did Bobbitt. Lafferty was slightly off-pace today but we know he will use this as motivation to come back stronger for the next race. We are glad to have three riders in the top five and we are looking forward to a successful season."