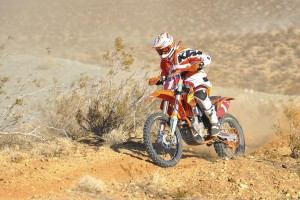 Factory FMF/KTM rider Kurt Caselli finished second over at the second round of the AMA National Hare & Hound Series after an all-day battle with Kendall Norman for the lead position.

Caselli started the race in second position as the riders headed down the start straight and onto the first loop. He trailed Norman the entire race making multiple attempts to pass with thick dust as a major obstacle. "I tried as many times as I could to make a pass on Kendall but the course was very narrow and incredibly dusty. It was unsafe to make passes in most places on the track, and unfortunately, I had to settle for second place," commented Caselli.

Caselli, the reigning champion, knew it was better to finish on the podium than to risk trying to make a sketchy pass to take over the lead. At the end of both loops, Caselli was only 9 seconds behind Norman. The riders will now have a long break until the third round of the series which will take place on March 24, 2013 in Murphy, ID. 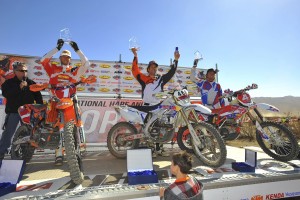 Kurt Caselli, the reigning champion, knew it was better to finish on the podium - Photo: Mark Kariya[/caption]