Looking Ahead To Supercross In San Diego 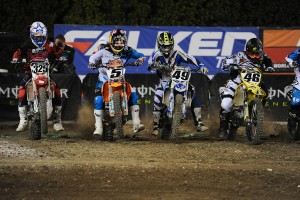 Ryan Dungey will look to head into San Diego with momentum from his win last week - Photo: InsiderMX.com[/caption]

Supercross is back in action this weekend. The motorsports series is heading to Qualcomm Stadium in San Diego, California, for the sixth round of the season, and so far it looks like the race is up for grabs.

Ryan Dungey will look to head into San Diego with momentum from his win last week, where he barely qualified for the main event and had to battle back from a difficult start to take the lead. He'll be up against competition like Ryan Villopoto, Davi Millsaps and Justin Barcia, who have had strong starts to Supercross with victories under their belts already this season.

Villopoto and Millsaps have won in San Diego before, along with Chad Reed and James Stewart, so they will likely make up the top contingent at the upcoming race. Millsaps has also landed on the podium in four of the five races in 2013, making him an early favorite to do so again this weekend.

In the 250 class, KTM's Ken Roczen and Honda's Eli Tomac are the early favorites. Tomac already has multiple victories under his belt this season while Roczen won last week in Anaheim, so fans will want to keep an eye on the two competitors as they duke it out for the top spot.