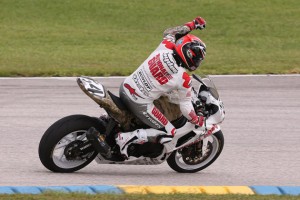 AMA Pro Racing and the Army National Guard have reached an agreement that will extend their partnership through the 2013 season. This will be the fifth straight year that the two organizations have worked together. The team effort began in 2009, when racing fans at live events were treated to promotions and outreach programs from the Army National Guard, as well as occasional crossover activities and sport bike gear giveaways.

"We are extremely proud of our relationship with the Army National Guard," said Michael Gentry, the AMA's chief operating officer. "The combination of our strong American brands gives AMA Pro Racing and our competitors the opportunity to proudly represent the red, white and blue and show our support for the men and women that serve our country."

The National Guard also sponsors a racing team with Michael Jordan Motorsports, and the team celebrated its first win in the penultimate round of the 2012 season. Roger Lee Hayden had his first AMA Pro National Guard Superbike victory at the Homestead-Miami Speedway while riding a red, white and blue bike, and the team will look to recreate that feat once the 2013 series gets underway on March 14.