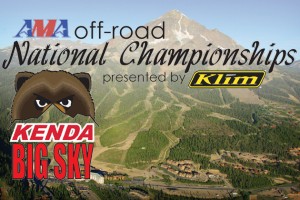 In order to qualify for the event, riders must have finished in the top 10 in 2012 or be in the top 10 of their current series' point standings as of mid-July. From February 16 to July 7, twelve different regional qualifying races in the various divisions will be taking place across the U.S., with the top 10 in each race qualifying for the Big Sky Amateur National Off-Road Championship, as well as giving amateur riders a chance to make their mark on off-roading before battling it out for the title.

The are also 150 spots open for bidding by interested riders who have not qualified elsewhere, however over the next few years these open spots will be removed. Racing at the AMA Off Road Nationals will eventually only be available for racers who've qualified via through racing.