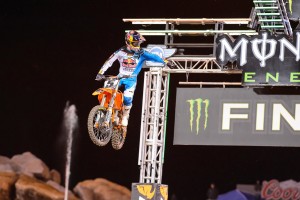 Ryan Dungey won his first 450 Supercross race of the season in front of a packed Anaheim crowd at Angel Stadium - Photo: Simon Cudby[/caption]

Red Bull KTM Factory rider Ryan Dungey won his first 450 SX Supercross race of the season in front of a packed Anaheim crowd at Angel Stadium. Dungey's win marked the second KTM win of the night after his teammate, Ken Roczen, took the victory in the 250 SX Class for the second weekend in a row.

Ryan Dungey's day started well with him turning fast lap times in the afternoon qualifiers. Unfortunately, a mechanical issue right at the start of his heat caused him to not finish the race and he had to race the LCQ.

In the LCQ, Dungey got caught in a first turn pile up and had to work his way into qualifying position. He passed into the final qualifying spot on the last lap to transfer into the main event.

His luck would change when the gate dropped for the main event. Dungey leaped out front to a 2nd place start behind Mike Alessi. He quickly made a pass into the lead on the second lap of the race and he never looked back. Dungey pulled away out front on his KTM 450 SX-F while the others battled behind him to take his first win of the 2013 Supercross season. 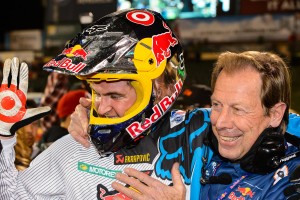 Dungey and Roczen's win marks KTM's first-ever sweep of both Supercross classes. "Tonight has been a great night," remarked Red Bull KTM Team Manager Roger DeCoster. "We are so proud of both our rider's and the entire work our team has put in to get to this point. Now we just need to work harder to stay here." 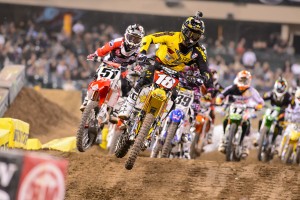 Davi Millsaps continued his strong season with a second place finish behind Dungey, which was enough to keep him on top of the overall points standings.[/caption]

Supercross brought its competitors back to Angel Stadium in Anaheim, California, for the third and final time this year, and the results had a distinctly orange tint. KTM dominated the fifth overall round of the motorsports series, as Ryan Dungey and Ken Roczen won their events in the 450 and 250 classes, respectively.

Dungey had a rough start to the night in the 450 class, as he struggled through the qualifying rounds and barely made it to the main event. He was able to right the ship in the final race, however, quickly turning his second place start into the leading position on the second lap, all the while avoiding several crashes and hang ups that hindered other riders.

"We felt some emotion coming into tonight's race after barely making it into the main event," Dungey told Cycle News. "The team was sweating it, but we pulled it off."

Davi Millsaps continued his strong season with a second place finish behind Dungey, which was enough to keep him on top of the overall points standings. Dungey's top finish propelled him up to second place in the rankings, according to Ultimate Motorcycling.

In the 250 class, Ken Roczen led the main event from start to finish, earning the win and the number one overall ranking. He was followed by Martin Davalos and Eli Tomac, who rounded out the podium with second and third place finishes, respectively. 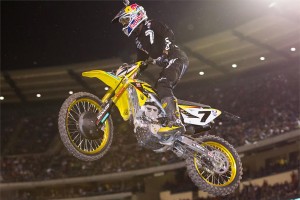 Yoshimura Suzuki Factory Racing's James Stewart celebrated his best result of the season so far at round five of the AMA/ FIM World Supercross Championship on Saturday night.

Stewart demonstrated tremendous speed and skill as he raced his Yoshimura Suzuki RM-Z450 to a solid fourth-place finish as the series visited Angel Stadium in Anaheim, California for the third and final time this year.

The Anaheim 3 Supercross saw Stewart once again claim rights to the fastest qualifying time in the premier 450 class. Despite nursing an injured knee from round one, Stewart has been the fastest qualifier at four of the season's five events. And in Saturday night's eight-lap heat race, the Yoshimura Suzuki rider again showed formidable speed, overcoming a poor start and picking his way through the field to finish a promising third.

Said Stewart: "In the heat race, I got a bad start, but I made my way up to third. I had some good lap times on the Yoshimura Suzuki RM-Z450. I felt pretty good and I was riding pretty strong." 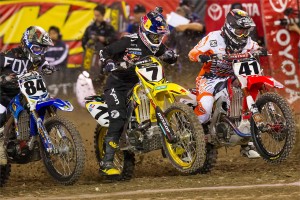 "I'm happy to leave Anaheim healthy and in the top five." - James Stewart[/caption]

At the start of the 20-lap Main, he struggled but slotted into fifth place by the end of lap one. Riding like the multi-time champion that he is, he pushed hard and moved smoothly into third place, and then into the runner-up spot. He fought an intense battle for second and ran in a podium position for most of the race before eventually finishing fourth.

"The race was pretty interesting," said Stewart. "I got a terrible start but I made some good passes. There were a couple of different pile-ups but I was able to avoid those this week. I ran second for more than half the race and then third for another quarter - and then ended up making a couple of mistakes- but fourth place could be worse. Overall, I was happy about being up at the front. It was a big confidence-booster and I'm happy to leave Anaheim healthy and in the top five. We'll continue to build, the Yoshimura Suzuki RM-Z450 was working awesome; and we'll continue to work on it and get ready for San Diego."

Yoshimura Suzuki Factory Racing's next event is the sixth round of the 2013 AMA/ FIM World Supercross Championships on Saturday, February 9th at Qualcomm Stadium in San Diego, California. 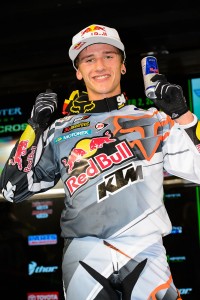 Red Bull KTM Factory rider Ken Roczen earned his second 250 SX win of the season at Angel Stadium in front of the Southern California crowd. Roczen's second straight win helped increase his points lead in the championship standings and allows him to head to the next round still wearing the red number plates that represent the points leader.

Ken Roczen rode strong all day long, turning fast lap times and eventually qualifying into the main event with a 2nd place finish in his heat. Roczen's solid heat finish gave him a good gate pick for the main event.

Off the start of the 250 SX main event, Roczen rounded the first corner in 2nd place. He quickly pulled into the lead before the end of the first lap and began to focus on pulling from the pack. Roczen held on to lead all 15 laps of the main event on his KTM 250 SX-F to capture his second straight victory of the season. Now five rounds into the series, Roczen holds a 20 point lead in the championship standings.

"It is so great to get up here and have my hard work finally pay off," commented Roczen. "My team and I have been working really hard this year to put our KTM's up front and in the championship hunt and I feel like we are in a good position. I can't wait for the next race."