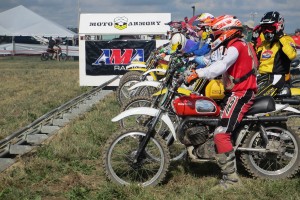 These new series will have four rounds taking place throughout the summer, debuting in Athens, Ohio, on May 4 and 5 and running until July 19 to 21 in Lexington, Ohio. The two middle rounds will be held on June 1 and 2 in Bronson, Michigan, and June 22 and 23 in Casey, Illinois.

Each round will last for two days, featuring vintage hare scrambles and motocross races on Saturdays and post-vintage races on Sundays. The final event will be a part of the AMA Vintage Grand Championships held at AMA's Vintage Motorcycle Days Festival, which celebrates classic bikes and motorcycle gear.

"Vintage racing is an important part of the AMA's past, present and future, and I'm pleased that we are able to expand our vintage motocross program into a series," said Kip Bigelow, the AMA's motocross manager. "Our members have expressed considerable interest in more vintage racing ... I'm looking forward to some great racing on the track."