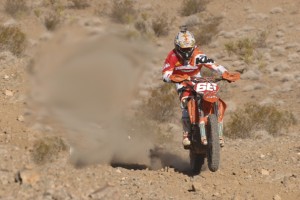 "I felt like it was the right thing to do," remarked Kurt Caselli after the race - Photo: Mark Kariya[/caption]

Factory FMF/KTM rider Kurt Caselli did not finish the opening round of the AMA National Hare and Hound Series after stopping to help a fellow racer, and his personal friend, fallen on the trail. Caselli helped his friend to safety, but unfortunately, did not earn any points for the first round.

The day started better than it ended for Caselli, who is fresh off his return from the Dakar Rally where he won two stages of the famous long-distance race. Caselli pulled the holeshot after the riders launched off the start line and down the bomb. In the opening miles he battled with top riders for the lead position. As they reached the 10 mile marker, the riders encountered the most challenging hill of the day. Unfortunately, Caselli hit a large boulder in this section that smashed his rear brake system. He had to ride the remainder of the downhill and the next 30 miles without rear brakes until he got to the pits.

His mechanic was ready for him when he got there and did a quick change of the brake system. Caselli returned to the race outside the top twenty but was quickly making up time. Partway into the second loop, while Caselli was sitting in an estimated 16th place, he spotted a fallen rider on the trail. The rider had broken his leg and had not been seen by any of the previous riders. Caselli made a decision to stop and care for the rider. He helped the rider get on the back of his bike and rode him to the medics.

"I felt like it was the right thing to do," remarked Caselli after the race. "I definitely wanted to finish the race and earn as many points as I could toward the championship but I did not want to leave a fellow rider on the trail without help. Luckily, this is the first race of the series and I have some time to come back and hopefully make up the ground I lost today."

Factory FMF/KTM Team Manager, Antti Kallonen, also commented, "It was a tough race today. We are proud of Caselli for helping his friend. We know many of us would have done the same thing. What is important is that Caselli was riding well and we know he will be strong for the remainder of the season. We are looking forward to the next round."

Caselli's teammate, Ivan Ramirez, also suffered an unfortunate circumstance after a sinus infection escalated and caused him to get Bell's palsy. Ramirez did show up at the race, but decided not to race prior to the start of the event after he had difficulty with his vision. Ramirez is currently in the process of healing from his illness and is hoping for a full recovery before the second round of the series.