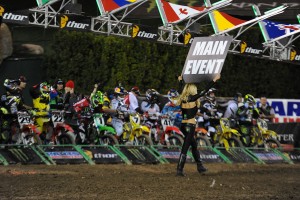 AMA Supercross is off to a fast start and it shows no signs of slowing down - Photo: InsiderMX.com[/caption]

AMA Supercross is off to a fast start and it shows no signs of slowing down. The fourth stop in the motorsports series will head to O.co Coliseum in Oakland, California, this weekend, as riders from the Western Regional 250 class and the AMA 450 class duke it out.

In the 450 class, three different riders have won the three events so far in the year, and many competitors will be challenging to become the fourth new winner. However, all eyes will be on favorites like Ryan Villopoto, Trey Canard, Ryan Dungey and Davi Millsaps, all of whom have had a strong start to the year and will likely challenge for the win. Villopoto may have gained some momentum after a come-from-behind win last weekend in Anaheim and should be riding that wave onto the track.

In the Western Region 250 class event, the heavy favorite will be Eli Tomac, as he tries to remain perfect in races this season. Tomac is currently atop the points standings in his division and is riding a three-win streak into Oakland, where he'll have to stave off Ken Roczen and Cole Seely - both of whom are nipping at his heels in the rankings.