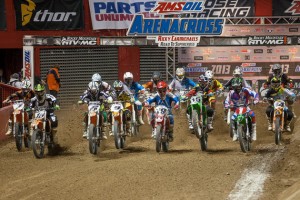 Tyler Bowers has momentum on his side as Arenacross speeds into Tulsa, Oklahoma, for the fourth round of its motorsports season - Photo: Joshua Rud[/caption]

Tyler Bowers has momentum on his side as Arenacross speeds into Tulsa, Oklahoma, for the fourth round of its motorsports season. The Kawasaki rider won all four main events in the two nights of racing in Grand Rapids, Michigan, last weekend to bring his total overall wins this season up to three and build up a commanding 35-point lead in the standings.

This Arenacross season is different than in years past, as the final three rounds will feature the top 10 riders in the standings in a "Race to the Championship." Before riders make it to that elite level of competition, they first have to get through the first portion of the season, including the upcoming round at the BOK Center in Tulsa.

Bowers has practically clinched his position as one of the final 10 riders in the Race to the Championship, which will decide the Arenacross title holder. At the halfway point in the series, he is in a good position to be among the top 10 that compete for the championship, along with Zach Ames and Michael McDade, who are currently in second and third place overall. Fans should also keep an eye on Jeff Gibson, who finished as the runner-up to Bowers in three of the four races in Michigan and looks to be making a push to the top.