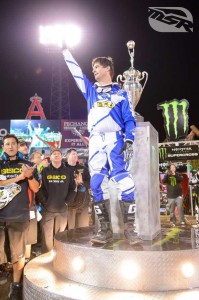 "I would love nothing more than to ride forever," Windham said. "... [But] with every passing lap - be it at the track, my home track or the stadium - it became more and more difficult to ride with the clarity I needed to be safe, fast and successful."

Windham ends his career with more than 200 Supercross starts - which is the second-most all time - 19 wins, two titles and three second-place finishes. He had originally planned on extending his run through the 2014 season, but the dangers of the sport, as well as potential and existing injuries, eventually convinced him otherwise. The veteran had become a fan favorite in recent years thanks to his years of experience and solid racing style, and he said the thing he will miss most about motorsports is the connection with his avid following.