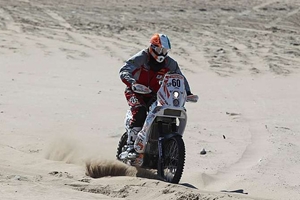 won his fifth Dakar Rally over the weekend, solidifying his stance as one of the premiere marathon racers of his generation. Despite the Frenchman's overall dominance, several Americans were able to separate themselves from the pack and make some waves in the long-distance competition.

Kurt Caselli made his mark in the seventh stage of the Dakar Rally, which was held in South America. The American rider, who was added to the KTM team as a last-minute replacement for the injured Marc Coma, grabbed his first stage win in the motorsports event after finishing the 220-kilometer (136-mile) leg in less than two hours.

The seventh stage was set in the high altitude, mountainous area of the Andes between Calama and Salta in Argentina. Caselli took advantage of his speed and racing experience throughout this leg of the course, separating himself from the other competitors and becoming the first newcomer to win a stage of the Dakar Rally since 2006, Ultimate Motorcycling reports.

Just days later, Caselli returned to the podium with a win in the 11th stage of the rally. He battled through rainy weather to cross the finish line almost five minutes ahead of the next racer. The 452-kilometer (280-mile) stage ran across the sand dunes and desert terrain of Argentina, for which Caselli and his gear were aptly suited.

Caselli ended the competition in the 30th position overall, while fellow American Johnny Campbell claimed the 40th spot out of more than 360 riders.