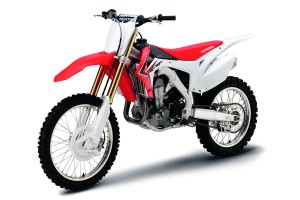 The 2013 Honda CRF450R has been completely redesigned, and the lucky few who have gotten to test ride the bike have all indicated it did not fail to impress - Photo: Mark McIntyre[/caption]

Honda makes a number of race-ready dirt bikes that span the range of classes, but if you're looking for a 450cc motorcycle, you might want to check out the new CRF450R. The 2013 Honda CRF450R has been completely redesigned, and the lucky few who have gotten to test ride the bike have all indicated it did not fail to impress. With a new centralized design, redesigned suspension system, lower center of gravity, revamped engine and other gear tweaks, the latest CRF450R is expected to change the face of 450cc racing this year.

The biggest change to the CRF450R is the new "mass centralization," meaning that Honda essentially piled all of the dirt bike accessories on top of each other so they take up less space. This also helped to reduce the overall weight of the bike, making it easier to maneuver on the track. Perhaps the most, or least, noticeable, aspect of this redesign is the exhaust system. The CRF450R has twin mufflers that are nearly hidden beneath the rear fender instead of jutting out behind the bike, which helps riders scrub and whip their bikes around the track. To compensate for the shorter length, Honda made the exhaust valves larger. 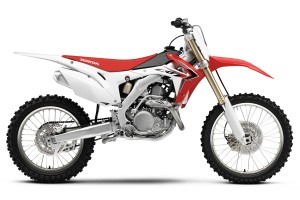 The CRF450R has twin mufflers that are nearly hidden beneath the rear fender instead of jutting out behind the bike - Photo: Mark McIntyre[/caption]

Every good overhaul includes a lot of changes to the engine and transmission, and the CRF450R is no different. Honda didn't install a new motor, but it made plenty of adjustments to the existing model, including a new piston shape, porting and valve timing. The manufacturer also improved the cylinder lubrication system and included a six-spring clutch as well as a revised transmission system. The result of all these changes is a dirt bike that has more bottom-end power than the 2012 model without being overpowering and uncontrollable.

In order to improve handling that would match the new power level of the CRF450R, Honda also made a few adjustments to the chassis. The 2013 model has an all-new twin-spar aluminum chassis that was built to complement the air fork and swingarm, as well as enhance steering feedback. The brand new 48mm inverted pneumatic spring fork is not only two pounds lighter than a conventional model, but it is easily adjustable, so riders can fine tune the pressure with nothing more than an air pump.

While it is still early in the season, so far this year's Supercross looks like it might be a whole different landscape. In the first two races 4 to 5 of the Top Ten riders were on Honda CRF450's, which is on par with last year (2012 went 4 our of 10 for the first two races), however this time around Hondas crowd the top of the overall series point standings - holding second, third, and fourth. I am eagerly awaiting the next race to see if the bikes can hold up to initial surge.