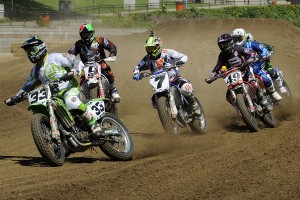 Dirt track racing has been a staple of American motorsports for years - Photo: Dave Hoenig[/caption]

Dirt track racing has been a staple of American motorsports for years. What originally started on horse racing tracks transformed into a popular series with multiple divisions, famous riders and action-packed competitions that keep spectators on the edges of their seats. The series attracted some top motorcycle talent from the 1950s to 1980s, who performed over multiple distances and track types in order to go after the Grand National Championship.

A new exhibit dedicated to honoring the legends of dirt track racing will be opening at the National Motorcycle Museum in June. The exhibition will open to the public on June 8 as part of the Vintage Rally weekend in Anamosa, Iowa, and will feature paraphernalia from and information on the heyday of this motorsport. Fans can get an up close look at motorcycle accessories used during the time period, as well as bikes, iconic photos, frames, wheels and more.

The National Motorcycle Museum has been showcasing memorabilia from decades of racing since its inception in 1989. This privately owned museum is dedicated to sharing the story and the evolution of motorsports, giving visitors the chance to see more than 300 bikes and priceless pieces of history.