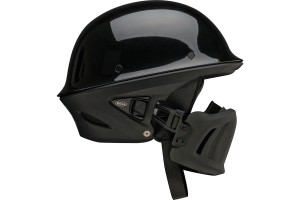 Bell Helmets is getting ready to release its new headgear, appropriately referred to as Rogue.[/caption]

Bell Helmets is getting ready to release its new headgear, appropriately referred to as [mageProductLink sku="650-7000792" title="Bell Helmets Rogue Half Helmet"]Rogue[/mageProductLink]. The unique design of the Rogue should set it apart from other motorcycle accessories on the market, as it combines the visibility of an open-faced helmet along with a level of protection and customization that was not available previously.

The new design stemmed from the idea that riders want an open-face helmet but don't want to have to use a bandana or some other type of covering to protect the lower half of their face. Bell also found the general consensus from some motorcycle owners was that they wanted gear with certain style, so the company took their feedback and put it towards Rogue.

"Rogue fulfills this need from both a standpoint of function and form, with an edgy design that makes it hands down the meanest-looking helmet we've ever made," said Chris Sackett, general manager at Bell.

A new detachable "muzzle" is the calling card of these helmets. Made out of a comfortable material and fitted with air vents and a removable fleece liner, the adjustable muzzle can be taken off or reattached to the helmet easily thanks to a magnetic connection system.