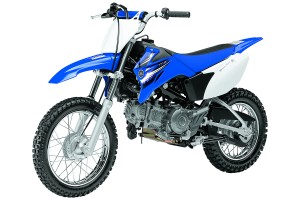 Yamaha has a number of bikes for young riders, and some are designed for beginners while others, like the TT-R110E, are aimed at the older crowd.[/caption]

Yamaha has a number of bikes for young riders, and some are designed for beginners while others, like the TT-R110E, are aimed at the older crowd. In fact, if you're looking for the perfect bike to give your teen rider this year, the 2012 TT-R110E might be the right choice. Not only is this dirt bike ideal for older kids who are just starting out on two wheels, but it is big enough that you or your spouse can take it for a test ride as well. One of the cornerstones of learning to ride a dirt bike is crashing, and this motorcycle is built to withstand a number of tumbles, topples and other crashes without taking too much damage.

Since the TT is a learning bike, the engine has a modest 110cc displacement, which is enough power to have fun but not so much that you'll be worrying when your kid hits the track. Like most other learners, this motorcycle has an automatic clutch, so shifting doesn't have to come into play as your youngster learns the ropes. If your kid wants to advance to a more serious model, you might have to teach them the ins and outs of manual shifting, but there are plenty of new bikes out there with automatic transmissions if they'd rather not worry about operating a clutch.

You kid won't be limited to the track either, and can learn to ride in a number of different scenarios. The suspension system of the TT-R110E affords riders 4.5 inches of travel in the front, and 4.3 inches on the rear, making it easy for them to clear nearly any obstacles that might stand in their way.

The four-speed bike also comes standard with electric push-button start, making it easy to jump right into the action. This is ideal to get kids up and running again when they fall down, which will happen while they're learning the ropes. A kick start might be more traditional, but it can be discouraging to want to get back on track after a spill and then have trouble getting the engine running again. The push-button starter prevents kids from getting frustrated and can help them stay focused on learning to control the bike. Plus, your kids won't be able to joyride without your permission either. The bike needs a key to start, which you can hang on to if you are worried about anyone sneaking in a midnight cruise when they should be finishing their book reports.