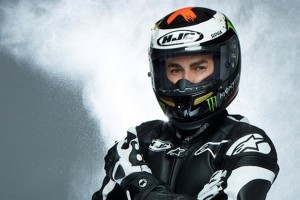 Reigning MotoGP champion Jorge Lorenzo will have a slightly new look when he begins the 2013 motorsports season. When he takes to the track for his first superbike race, he'll be wearing a helmet from HJC, the world's largest manufacturer of the motorcycle gear. Formerly known as Nolan Helmets, the Korean company is making waves as it extends its reach to different motorsports series.

"We are very proud to sign Jorge Lorenzo for the 2013 season as well as our other top riders," said George Hong, president of HJC America.

The other superbike competitor using HJC motorcycle helmets is Ben Spies, who recently ended his tenure as Lorenzo's teammate with the Yamaha factory and joined up with Ducati. Spies has helped [mageProductLink sku="035-1558-851" title="HJC RPS-10 Ben Spies Monster Energy Replica Full Face Helmet"]HJC develop several helmets[/mageProductLink] over the years, building an extensive relationship with the manufacturer that helped it sponsor racers like motocross competitor Kyle Chisholm and freestyler Nate Adams.