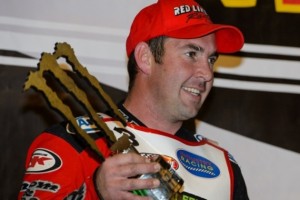 Billy Janniro came out on top in front of the sell-out crowd at The Grand Arena in Industry, California.[/caption]

The Monster Energy Speedway made its triumphant return to U.S. soil this past weekend, and one rider did his part to make it a winning weekend for the Americans. Billy Janniro came out on top in front of the sell-out crowd at The Grand Arena in Industry, California, after completing the 23 individual races that made up the event.

Janniro, a three-time AMA National Champion, started strong and only improved as the motorsports event went on. He performed well enough in the preliminary heats to advance to the semifinals, when he edged out his competition to land a spot in the finals. When the last round was underway, he shot out to a lead and held off the other riders during the final four laps. Janniro eventually crossed the finish line first and asserted America's domination over the field, which featured some of the best European Speedway racers.

"Monster did a great job tonight," Janniro told Speed TV. "I don't know how many thousands of people were here, but it was awesome. To win in front of everyone and for these Europeans to be here, it was a big achievement. I'm very happy."

American riders also took over the rest of the podium, as Greg Hancock and Ricky Wells finished second and third, respectively.