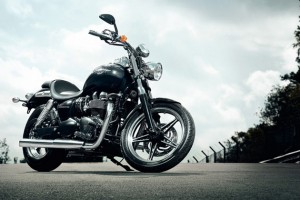 Triumph's cruisers are designed to be eye-catching hot rods that preserve a more traditional image of two-wheeled transportation.[/caption]

Triumph has a pretty varied lineup of motorcycles, as its sport bikes can easily blend in with the crowd, while its cruisers are designed to be eye-catching hot rods that preserve a more traditional image of two-wheeled transportation. Some of these bikes are laden down with cruiser accessories, but the Speedmaster is designed for the minimalist rider who wants nothing more than to feel the power of a Triumph engine between his legs. Now that the 2013 model is available, riders may be able to track down a used 2012 model. Despite being labeled an entry-level model, this motorcycle seems to please seasoned riders and newcomers alike.

The Speedmaster, which Triumph refers to as a "stripped down hotrod," has an air-cooled 856cc parallel-twin crank engine with a 270-degree firing interval. The fuel delivery system uses multipoint sequential electronic fuel injection, but Triumph disguised the injectors as carburetors to give the appearance of a classic ride. The cooling fins, however, are real, and help the bike stand out from the pack, even though the sheer power provided by the engine is more than enough to crush the competition. Even with so much power output, the Speedmaster is still a pretty efficient bike. Triumph claims the bike gets about 48 miles to the gallon in the city and 59 MPG on the highway. There may be other bikes that can squeeze more miles out of a drop of gas, but this Triumph offers a pretty decent fuel economy without sacrificing the thrill of the ride.

The bike comes in an elegant Phantom Black or a more classic Cranberry Red. Aside from the color selection, Triumph also makes the bike appealing to hotrod lovers thanks to the large, black cast wheels and a small, bold headlight. The fuel tank, which holds up to 5.1 gallons, was crafted to reflect the styling of bikes from years past with its sleek teardrop shape. Triumph's decision to include slash cut pipes really completes the package, as this is a feature you don't often see on modern bikes. Triumph chose to lower the seat to more of a low-rider position (27.1 inches), but the designers compensated for this by designing handlebars that rear farther back, allowing riders to feel comfortable on longer jaunts.