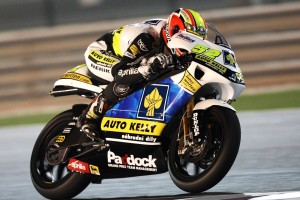 Lukas Pesek, who previously competed in Moto2 and Grand Prix racing, rounds out the 12 riders for the Claiming Rule Teams.[/caption]

Lukas Pesek recently signed with Ioda Racing, making him the 24th and final entrant on the MotoGP racing grid. Teams in the motorsports series submitted their preliminary lists of racers earlier this month, but there were only 23 names as Ioda struggled to take the last spot. Rumors swirled about a number of other possible riders before the team reached an agreement with Pesek.

The Czech competitor, who previously competed in Moto2 and Grand Prix racing, had his best motorsports season in 2007 but has been delivering consistent finishes for the past several years. Pesek's signing rounds out the 12 riders for the Claiming Rule Teams, as the factory and satellite teams have been set for some time.

"I'm very happy to get this opportunity," Pesek told Ultimate Motorcycling. "... Racing in MotoGP is definitely not an easy task, I'll be up against the best riders in the world - it's a big step for sure, but I'll give it my best."

According to the news source, the final motorcycle lineup for the upcoming season features 14 bike prototypes, including the new Ducati 1199 Panigale racing machine and the Yamaha YZR-M1, each of which will be ridden by championship contenders.