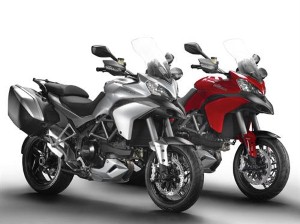 Bruce Willis has been involved with charitable endeavors for some time, but now he has merged his desire to help others with his love of motorsports and found some rousing success. The actor is auctioning off five of his personal motorcycles to benefit the Boot Campaign, which aids military members and their families, and the first bike sold brought in more than $6,000.

Bidding on the Ducati Multistrada closed at $6,250, Motorcycle.com reports. The motorcycle has just 285 miles under its belt and is in pristine condition, making it feasible that the bike could have commanded a significant chunk of change in an auction even without the connection to Willis. According to the news source, Kelley Blue Book lists the model's value at just above $6,045, so its celebrity ties did not increase the value as much as one may have expected.

The next ride will hit the auction block in February, and the sales are set to continue through August. Enthusiasts can expect to see classic bikes like a 1962 Cushman Eagle and a 1972 Harley-Davidson Ironhead Sportster XLH changing owners in the near future.